SVOTS Leaders Minister to the Wider Church During Lent

SVOTS Leaders Minister to the Wider Church During Lent 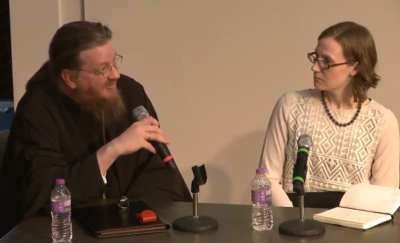 Fr. John fields a question at the North Park University eventThroughout the 2016 Lenten season, both the Dean and Chancellor/CEO of St. Vladimir’s Seminary traveled far and wide to minister to the broader Church by serving liturgically, offering retreats, and presenting talks and lectures. The Very Reverend Dr. Chad Hatfield, SVOTS Chancellor/CEO said with a touch of humor, “When Great Lent begins, I feel a bit like St. Zosimas of Palestine, as I leave my ‘monastery’ to ‘wander about’ before returning!” 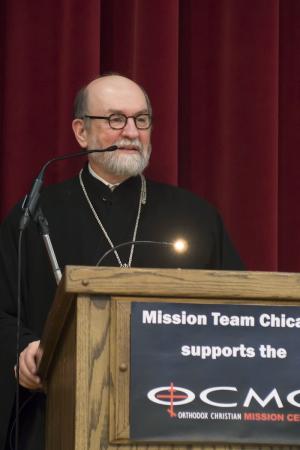 Fr. Chad, who teaches Missiology at St. Vladimir’s, speaks at the Mission Team Chicago eventIn early March, both Fr. John and Fr. Chad traveled to Chicago to offer presentations. Father Chad was the guest speaker for the 19th annual Mission Team Chicago benefit dinner on March 10, sponsored by the Orthodox Christian Mission Center (OCMC). Among other things, the event provided much needed scholarship funds that will enable seminarians to participate in short term mission teams.

A few days prior, Fr. John was one of three distinguished respondents at an important lecture offered by Metropolitan Kallistos Ware: “The Unchanging Gospel in an Ever-Changing Culture.” The talk was presented on the campus of North Park University, and served as the inaugural event in the Engaging Orthodoxy Speaker’s Series. North Park is an evangelical institution; as such, the lecture was offered to an audience made up people from a variety of Christian traditions. Metropolitan Kallistos and Fr. John presented the Eastern Orthodox understanding of the Gospel, and offered practical guidance on how parishes can keep the message of Christ in its rightful central place. (View the event on YouTube.) 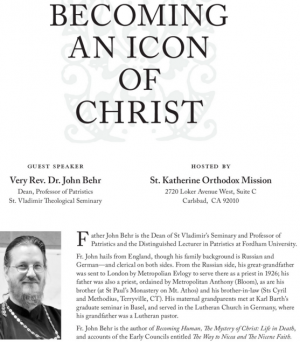 Flyer for St. Katherine of Alexandria Mission lectureThroughout the remainder of Lent, the Dean and Chancellor moved from one location to the next, offering a total of seven retreats in five different states, and visiting with alumni and seminary supporters from all jurisdictions. Father John Behr traveled to Carlsbad, California to lead a retreat, “Becoming an Icon of Christ,” for alumnus Fr. Andrew Cuneo and the community of St. Katherine of Alexandria Mission (OCA). In Abilene, Texas, he presented a retreat to parishioners at St. Luke Orthodox Christian Church (Antiochian Archdiocese), pastored by SVOTS Trustee, the Reverend Dr. Philip LeMasters. While in Abilene, Fr. John also offered lectures to the students at McMurry University. On April 9, our Dean journeyed to Steelton, Pennsylvania to lead Parish Renewal Day with alumnus Fr. Christopher Rocknage and the community of St. Nicholas Serbian Orthodox Church. (Listen to Fr. John’s lecture, “Becoming an Icon of Christ.”)

Also in Pennsylvania, Fr. Chad led a retreat titled “Sacerdotal Living” for the Wilkes Barre Deanery, and was encouraged to see the focus on clergy support that is developing in the Diocese of Eastern Pennsylvania under the leadership of an SVOTS alumnus, Archbishop Mark (OCA). In the same state he offered a Lenten retreat titled “Mary, Mysteries, & Mission” at St. Philip Orthodox Church in Souderton, where yet another alumnus, Fr. Noah Bushelli, is leading a thriving community within the Antiochian Archdiocese. 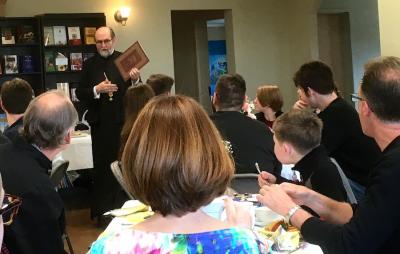 Fr. Chad shares the St. Vladimir’s Annual Report with the faithful of St. Patrick Orthodox Church in Bealton, VAIn early April, Fr. Chad led a retreat for the Carolina Deanery of the OCA’s Diocese of the South. Many of the attendees were St. Vladimir’s alumni, and he noted the supportive brotherhood of clergy that is forming there. Also in April, Fr. Chad journeyed to Bealton, Virginia to offer a Lenten Retreat at St. Patrick Orthodox Church, a Western Rite parish in the Antiochian Archdiocese. “It’s one of the most creative parishes I have seen for many years,” Fr. Chad said. “I was impressed with the setting, and by the parish that was built by the hands of its own parishioners.”

“It’s always a great joy and blessing to minister to the greater Orthodox world during this holiest of seasons,” noted Fr. John. “Our alumni are leading the way as they build up the body of Christ through their pastoral leadership and teaching. We are thankful to see how God is guiding them and blessing their ministries greatly.” Father Chad agreed, adding that Great Lent “is the key time for us to reconnect with parishes and people, to solicit feedback from our alumni and fellow clergy, and to offer mutual encouragement and support to one another.”