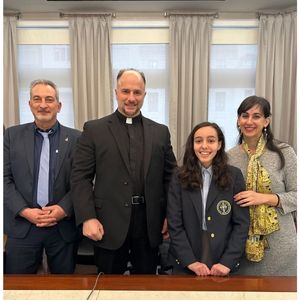 The Archdiocesan Spelling Bee Finals for the students of the District’s Greek-American Day Schools were held on Thursday, January 19th, at the Headquarters of the Greek Orthodox Archdiocese.
On behalf of His Eminence Archbishop Elpidophoros of America, Rev. Protopresbyter of the Ecumenical Throne Elias Villis, Chancellor of the Archdiocesan District, welcomed and gave a prayer to the students.