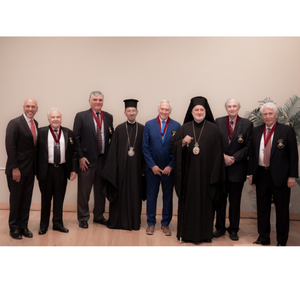 The Archons of the Pacific Northwest in the Greek Orthodox Metropolis of San Francisco hosted His Eminence Archbishop Elpidophoros of America on his first trip to the area, along with His Eminence Metropolitan Gerasimos of San Francisco and His Grace Bishop Ioannis of Phocaea (Metropolis Chancellor), at a luncheon on Saturday, September 24, 2022. The hierarchs were visiting to help celebrate the 100th Anniversary of St. Demetrios Church in Seattle, WA.