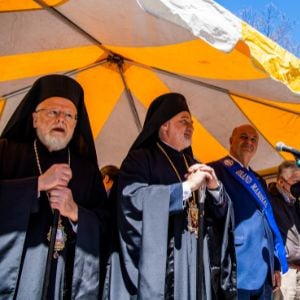 On Thomas Sunday, May 1, 2022, His Eminence Archbishop Elpidophoros made a pastoral visit to the Annunciation Greek Orthodox Cathedral of New England in Boston before marching in the city’s Greek Independence Parade later that afternoon. The Archbishop was joined by His Eminence Metropolitan Methodios of Boston, His Grace Bishop Athenagoras of Nazianzos, and Father Thomas Chininis, Dean of the Cathedral, in celebrating the Divine Liturgy.