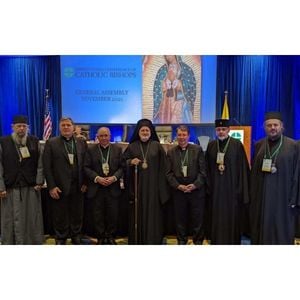 t the invitation of His Excellency Archbishop José H. Gomez, President of the United States Conference of Catholic Bishops (“USCCB”), His Eminence Archbishop Elpidophoros of America, chairman of the Assembly of Canonical Orthodox Bishops of the USA, led a delegation to and presented remarks during the USCCB’s November General Assembly.