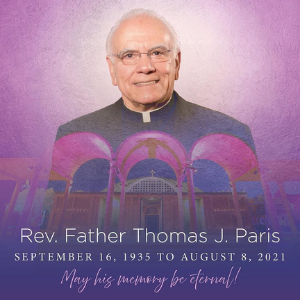 Reverend Father Thomas J. Paris, Dean Emeritus of the Ascension Greek Orthodox Cathedral in Oakland, passed away on August 8, 2021 following a long battle with cancer. Fr. Paris, the son of James and Grace Paris, was born and raised in Chicago, Illinois on September 16, 1935. He served as president of his parish youth group and was the captain of the altar boys. He earned the rank of “life scout” and served as an assistant scoutmaster. He received the Phi Beta Kappa and B’nai B’rith Youth of the Year Awards and was selected for the Chicago Tribune all-city football team.