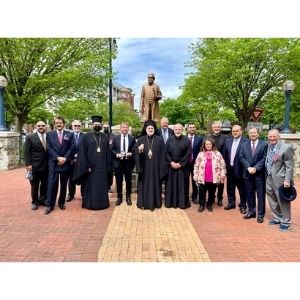 In light of the bicentennial of the Greek revolution, His Eminence Archbishop Elpidophoros of America, together with the His Grace Bishop Apostolos and the area clergy joined the Mayor of Annapolis, Gavin Buckley, and Maryland State Senator, Edward Riley, in placing a wreath at the statue of Constantino Brumidi, a Greek-Italian who became known as the Michelangelo of America whose art adorns the dome of the Capitol of the United States.