With faith in Christ and hope in the Resurrection, we share news of the repose of Protopresbyter Justin Yoshito Yamaguchi of Japan, who fell asleep in the Lord on Wednesday, April 15, 2020 due to cardiac failure. He was 86 years old.

Father Justin served as a priest of the Orthodox Church in Japan for fifty years in various cities including Ishinomaki, Sendai, Tokyo, and Osaka. He graduated from St. Vladimir’s Orthodox Theological Seminary in 1968. 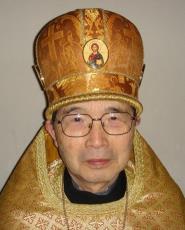