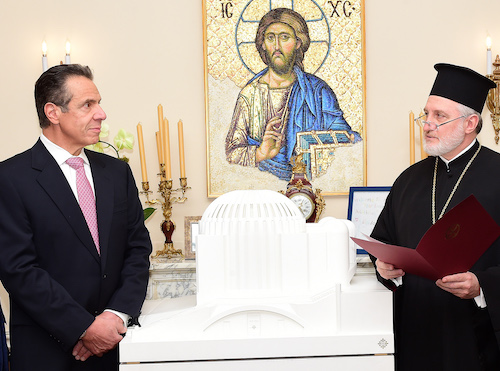 NEW YORK – Earlier today, Governor Andrew M. Cuomo officially welcomed Archbishop Elpidophoros of America to New York and announced plans to resume the rebuilding of St. Nicholas Greek Orthodox Church and National Shrine at the World Trade Center. This was the Governor’s first meeting with His Eminence since the Archbishop was elected by the Holy Synod of the Ecumenical Patriarchate as Archbishop of America to succeed Archbishop Demetrios in May. The project will be driven by a new non-profit organization with an independent, 13-member board – the Friends of St. Nicholas. The new entity has been formed to ensure that the sacred space is completed as expeditiously as possible and can begin welcoming visitors from around the world. The Friends of St. Nicholas will aim to resume construction with a two-year target to complete the church