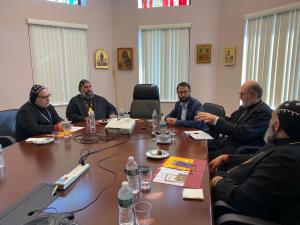 Three hierarchs from the Syriac Orthodox Church (SOC) visited their seminarians on campus and met with Seminary leadership Thursday: His Eminence Mor Dionysius John Kawak, archbishop and patriarchal vicar of the Archdiocese of the SOC for the Eastern United States of America; His Eminence Mor Titus Yeldho, archbishop and patriarchal vicar of the Malankara Archdiocese of the SOC in North America; and His Eminence Ayub Mor Silvanos, archbishop of America, Canada, and Europe Regions of the Malankara Syriac Knanaya Archdiocese.