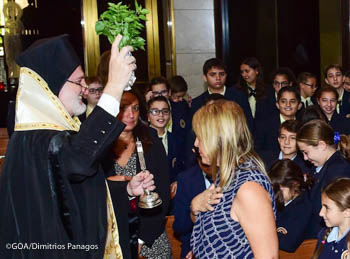 NEW YORK – His Eminence Archbishop Elpidophoros of America, celebrated today the service of the Sanctification of the Water for the new school year, at the Greek-American Day School “William Spyropoulos” of the Parish of Saint Nicholas in Flushing New York, one of the largest parishes in the Archdiocese. This was the second Agiasmos Service the Archbishop conducted for the start of the new school year.