His Eminence, the Most Reverend Nikon, Archbishop of Boston, New England, and the Albanian Archdiocese (Orthodox Church in America), fell asleep in the Lord on Sunday, September 1, 2019 in Southbridge, MA. 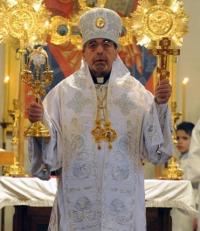 Born to a pious Orthodox family in 1945 in New York, Archbishop Nikon graduated from St. Vladimir’s Seminary in 1966. He was ordained to the diaconate on July 5, 1969, and to the priesthood the following day, July 6. His Eminence served at St. Nicholas Church, Southbridge, MA, and St. Thomas Church, Farmington Hills, MI.