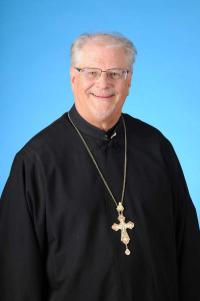 The Very Reverend Steven John Belonick reposed in the Lord Jesus Christ on August 7, 2019, after an extended illness, acute myeloid leukemia. Father Steven, who was an alumnus of St. Vladimir’s Seminary and served as the Seminary’s former Dean of Students and Chaplain, was 67 years old.

Born October 7, 1951, and raised in New Britain, CT, he was the only son of Steven and Ann (née Kochanowsky) Belonick. He was a graduate of Laurel Crest Preparatory School (1969), and he earned degrees at the University of Connecticut (B.A. in Biology, 1974) and at St. Vladimir’s Orthodox Theological Seminary, Yonkers, NY (M.Div., 1977). He also completed a two-year program in pastoral counseling at Onondaga Pastoral Counseling Center, Syracuse, NY (Certificate, 1992).