Alumnus Very Reverend Archimandrite Seraphim Poulos (John Poulos) fell asleep in the Lord on Friday, July 27, in his hometown of Ithaca, NY. Fr. Seraphim, who had battled cancer, was 68. 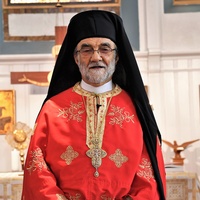 Fr. Seraphim was born in Groton, NY on May 26, 1950, and at the age of 2 his family moved to Ithaca. He graduated from Ithaca High School in 1969 and attended St. Vladimir’s Seminary from 1971 to 1974 in what was then known as the Collegiate Division. During those years he also worked on his bachelor’s degree at Iona College. Fr. Seraphim later obtained a Doctor of Ministry degree from the Catholic University of America in Washington, D.C.