A Positive First Day: The 44th Clergy Laity Congress Off to a good start

Home/Jurisdictions/A Positive First Day: The 44th Clergy Laity Congress Off to a good start
Previous Next

A Positive First Day: The 44th Clergy Laity Congress Off to a good start 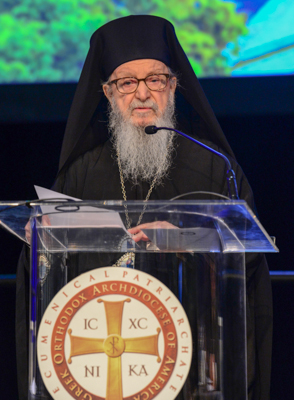 BOSTON – The 44th Biennial Clergy Laity Congress of the Greek Orthodox Archdiocese of America began with the Keynote Address of His Eminence Archbishop Demetrios of America, Monday morning July 2, 2018. The National Ladies Philoptochos Society concurrently and according to tradition, holds its own Philoptochos Biennial Conference; and both take place this year in the Boston Marriott Copley Place Hotel, thirty years after the 29th Congress that was held here in 1988.

Archbishop Demetrios of America led the opening prayer service assisted by Fr. Theodore Barbas, Chancellor of the Metropolis of Boston, Archdeacon Panteleimon Papadopoulos and Deacon Eleftherios Constantine. All the Metropolitans of the Holy Eparchial Synod were present, as well as the representatives of His All Holiness Ecumenical Patriarch Bartholomew His Eminence Elder Metropolitan Apostolos of Derkoi and His Eminence Metropolitan Maximos of Selyvria.

Michael Sophocles, Congress Co-Chair, welcomed the more than a thousand attendees to the Opening Ceremony. Greek American journalist and former News Anchor Mike Nikitas, served as the Master of Ceremonies.

The Mayor of Boston, the Honorable Martin Walsh, expressed his appreciation for the Clergy Laity Congress taking place in Boston, welcomed the participants and underlined the important role of the Greek Orthodox Church and community in the life and advancement of this great city, known around the world as the Athens of America.

Nicholas Burns, Former U.S. Ambassador to Greece and presently Harvard University Professor of Diplomacy and International Relations offered a very warm greeting and spoke about the revitalization of the economy of Greece. Present in the opening ceremony was the Consul General of Greece in Boston Hon. Stratos Efthimiou.

The President of the National Philoptochos Maria Logus in her greeting to the gathering briefly spoke of the compassionate work of love and philanthropy the twenty-eight thousand ladies of the Philoptochos are doing across the country. Finally, George Tsandikos, the Vice-President of the Archdiocesan Council and highest-ranking lay leader of the Archdiocese, conveyed to the participants a message of unity and hope.

His Eminence Metropolitan Methodios of Boston welcomed the delegates in his Metropolis saying that Boston is a fitting location for our gathering, not only because it is home to one of the historic Greek Orthodox communities in America and Hellenic College Holy Cross, but also because it is the birthplace of religious freedom in the United States. At another point of his opening remarks the Metropolitan noted: “In these biennial gatherings, we come together as a community to ensure that our faith, the pearl of great price, this Παρακαταθήκη, this sacred deposit, which has been entrusted to our care, is preserved and passed on to future generations.” (see full text)

A video message of His All Holiness Ecumenical Patriarch Bartholomew followed and His Eminence Metropolitan Maximos of Selyvria read the Patriarchal Message in English. (see here the video and read the patriarchal text) His All Holiness spoke about faith, which is the theme of the Congress, and said “authentic faith according to Christ generates creative powers and bears fruit in the lives of the faithful and in society.  Faith is union with God and simultaneously union with our neighbor through “love from a pure heart”.  (1 Tim. 1:5).  Faith and love comprise an integral existential reality in the life of the Church, which constitutes the “miracle of the New” in the world.”

The Patriarch expressed his concern for the unfortunate occurrences in the Archdiocese but also his confidence in a favorable outlook for better days noting: “We are not indifferent to these, but as we have been taught by God’s mercy, we are confident in a favorable outlook and better days, exercising our holy faith with discernment and patience, while standing with the holy clergy and the people of God, who – respectfully, lovingly, devotedly and gratefully – know how to relate to their Mother Church, which caringly and compassionately nurtures and protects their spiritual struggles and ecclesiastical integrity, while constituting a safety valve for the Greek Orthodox Archdiocese of America.”

Archbishop Demetrios of America delivered his Keynote Address, in which he recounted some of the key events since the last Clergy Laity of 2016 in Nashville. (see full text). The Archbishop expressed his genuine regret for the unexpected serious economic difficulties and problems and organizational inefficiencies and said: “For me, personally as Archbishop, after a long 19-year experience of serving here, and for the entire faithful of the Archdiocese, this dire situation caused truly unbearable pain.  This pain resulted from the fact that in spite of the sincere and unselfish offering of work done by many people, we suddenly found threatening before us an extremely difficult and really unacceptable situation. I am truly and deeply sorry for the disappointment, sorrow, frustration and pain that this unfortunate situation brought upon each and every member of our precious and beloved Archdiocese.”

Archbishop Demetrios then explained the actions taken and the appropriate measures for corrections including better arrangement and systemic enhancement of the administrative and financial management of the Archdiocese. An open special forum was held later in the afternoon answering all the questions regarding finances.

The Archbishop said that the Church always encountered challenges the greatest of which were in the early centuries of Christianity. “Since we are an integral part of the Orthodox Church, we are now facing our own portions of challenges,» he said and analyzed the following four challenges: a) The non-stopping change in everything, b) Economic pressure and poverty, c) Disconnecting from the Church and d) Attacks against the Christian Faith.  His Eminence said that “in order to successfully confront the aforementioned challenges, we have to undertake a number of important tasks and put forth specific goals and proposals. (see full text).

At the conclusion of the morning session, the Legal Counsel of the Archdiocese and Secretary of the Archdiocesan Council Dr. Cathy Walsh declared the Congress open. She announced that as of that moment there was a total of 346 participating parishes and 1,421 representatives as follows: 367 registered delegates to the National Philoptochos Convention, 1054 total registered participants in the Congress of which 736 registered Clergy Laity delegates, and 318 other representatives and participants associated with the Archons, the Retired Clergy Association, the Sisterhood of Presvyteres etc.