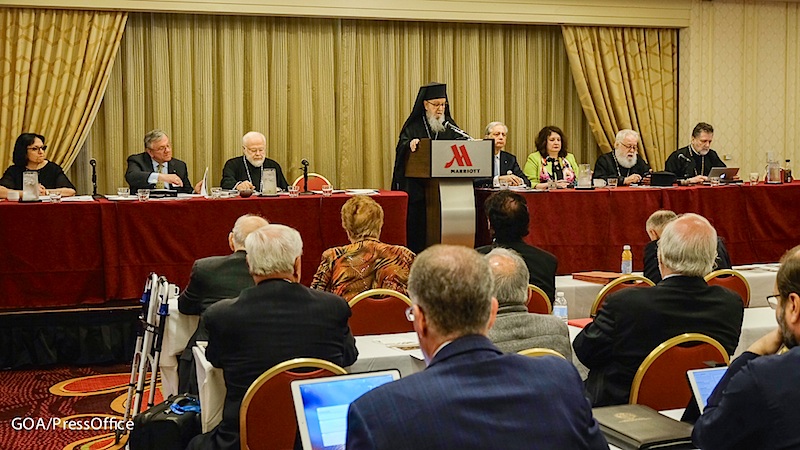 PITTSBURGH – The Archdiocesan Council of the Greek Orthodox Archdiocese of America held its regularly scheduled spring meeting in Pittsburgh, Pennsylvania, May 3-4, 2018, under the chairmanship of His Eminence Archbishop Demetrios of America.

The work began with the individual meetings of the council committees on Thursday, May 3. They included those on Finance, Administration, Audit, Marriage and Family, Stewardship-Outreach and Evangelism, Religious Education, Youth and Young Adult Ministry, Communications and Information Technology.

The Archdiocesan Council began its plenary session the morning of Friday, May 4.

Archbishop Demetrios opened the session with a prayer and the chanting of the hymn of the Resurrection “Christos Anesti.” In his opening remarks he expressed his gratitude to the members of the Council and the Metropolitans of the Holy Eparchial Synod, who work hard every day and contribute their time and talent to the sacred work of the Church, as it went through turbulent times.

Archbishop Demetrios talked about the flourishing parishes and communities of the Archdiocese across the country, many of which have celebrated and continue to celebrate centennial anniversaries, thus demonstrating their vitality and growth in the faith. This is the promising reality of the Archdiocese and you can see it in the radiant faces of our children across the country, he said. The Archbishop acknowledged the painful conditions in some financial aspects in the life of the Archdiocese; he said that the situation is many times intentionally or unintentionally distorted by an amazing number of misunderstandings and inaccuracies, as people in this post-truth era, rush to express and disseminate falsehoods and baseless opinions but not precise data. This is a painful situation for people of truth and precision, said the Archbishop.

Concluding and paraphrasing Saint Paul, the Archbishop said that there is a great and open door, an opportunity for productive work in the Lord, even if the opponents are many; and added that when faced with all this adversity we are victorious through Him who loved us.

The Vice President of the Archdiocesan Council George S. Tsandikos, in his introductory remarks said that the challenges of the financial crisis have come to an end. He also said that everyone is working hard towards the completion of St. Nicholas. We are united and we stand with our beloved Archbishop, he added. Furthermore, Mr. Tsandikos said that the people in the Church will remain united and not be deterred by any distraction. He urged the members of the Council to share the truth and, through the truth of the Risen Lord and the unifying message of His Resurrection, remain united and rejoice.

Lou Kircos, chairman of the Finance Committee, presented the treasurer’ s report. Archdiocesan Council Treasurer, Michael Psaros who attended the meetings the previous day, was unable to attend the plenary. Mr Kircos said that it is time to move forward and put the financial crisis behind us and also to make sure that it does not happen again.

He said there are many signs of progress in the finances. He reported that many parishes have prepaid their total commitment helping the Archdiocese in these difficult times. Mr. Kircos said that the financial stability was mainly achieved due to cuts to the tune of $8.3 million. He reported that the Archdiocese was able to repay one million dollars back to the Saint Nicholas account from which it had previously borrowed to cover operational costs.

Lou Kircos informed the Council that the Archdiocese is seeking a loan from a bank, which will allow for swift repayment of the balance owed to the St. Nicholas account and payment of other outstanding obligations. The Archdiocesan Council, following discussion, expressed the sense of the body to fully support the action of obtaining the loan.

Moreover, the Chairman of the Finance Committee praised the “Archbishop Iakovos Leadership 100 Endowment Fund,” that has been incredibly supportive especially during this last critical period.

Mr. Kircos continued with the report of the Finance Committee and the proposed budgets for 2019-20. There were extensive discussions on the budget and the anticipated increases in insurance and other inflationary costs.

Cathy Walsh gave a report on the legal challenges facing the Archdiocese. She noted that for many years the work of the legal committee and legal counsel for the Archdiocese has been provided completely pro bono, something that cannot be sustained with just volunteers.

Elaine Allen, chair of the Audit Committee, said that the work of the committee has been an experience of love for the Church and the Archdiocese and its members are committed to transparency and accountability in balance with the realities of litigation. She said that all the changes being implemented at the Archdiocese level have to cascade down to all other levels of the church, the Metropolises and the parishes.

Mrs. Allen, first reported on the work of St. Nicholas Special Investigative Committee. (see Press Release, Update on St. Nicholas Investigation). She said that the amount owed by the Archdiocese to St. Nicholas is less than $3.7 million and $1 million has already been returned, while the remainder is expected to be returned soon, and it will all be paid back with interest. This is behind us, and now is the time to look forward, she said. From the presentations and the discussion that followed it became apparent that there was no criminal activity or fraud related to St Nicholas.

Steven Christoforou, director of Youth and Young Adult Ministries presented a report on the work for Child and Youth Protection, the pertinent policies and the Youth Protection Manual that the department has created to help clergy and laity charged with the task of selecting, training, and supervising those who work with young people around the Archdiocese.

Constantine Carras, chairman of the Administration Committee, presented a number of amendments and modifications to the Archdiocese regulations and extensive discussion followed.

Archbishop Demetrios in his closing remarks said that this was a very good and substantive meeting. His Eminence echoed the convictions of all the members, as expressed throughout the meeting, and said that despite all the attacks, the misinformation and the negativity, the rebuilding of St. Nicholas has to resume as soon as possible and be completed as soon as possible. The Archbishop also urged the members to do whatever they can for the greatest possible participation of all parishes across the country in the 44th Clergy Laity Congress in Boston.