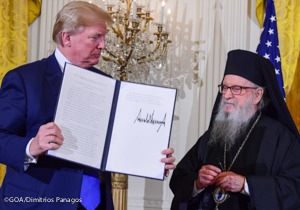 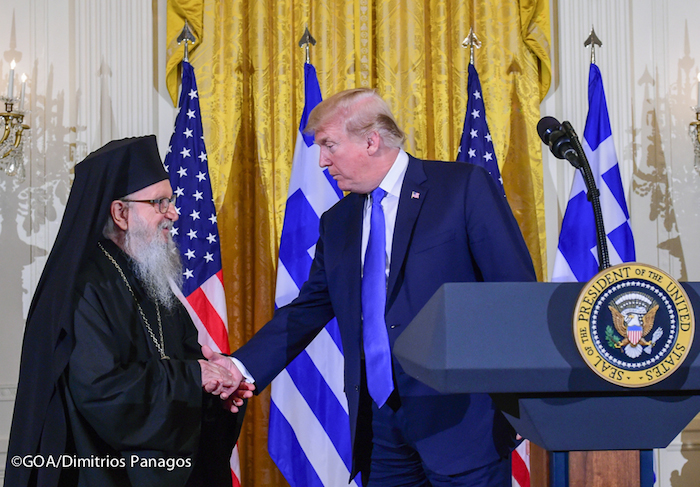 The President, joined on stage by Archbishop Demetrios, welcomed the hundreds of enthusiastic guests from the Greek American Community. He spoke of the common ideals and values of Greece and the United States and “the profound influence of Greek culture, art, and philosophy.” He argued that the two countries and peoples continue on this path as “We stand together for freedom and justice and democracy today and for all time.” (See his full address below)

Archbishop Demetrios spoke of the self-evident truths and God-given rights of liberty, freedom and self-determination as described in our American Declaration of Independence and asked the President to “continue to affirm them, all the more in this troubled world.” His Eminence also asked “for special care and attention to the continuous injustices suffered by our Ecumenical Patriarchate of Constantinople in matters of full religious freedom.,” and requested that the President speaks “on behalf of all of us for a fair and equitable solution to the prolonged and tragic division of Cyprus, and to the issue of an appropriate and historically justifiable name of the state of FYROM.” (see full text below)

The program, which began at 5:00 p.m. and concluded a little after 7:00 p.m., included performances of traditional folk dances by youth dance groups from parishes of the Greek Orthodox Archdiocese of America.

(as transcribed from sound recording)

Hello, everybody. What a group…What a group… Great to have you Archbishop. Is that right? It is really fantastic. (Applause)

Good afternoon. I’m thrilled to be here with so many wonderful friends and supporters to celebrate this very special occasion, Greek Independence Day. Important day, right?

We are delighted to be joined by members of the Cabinet as well as representatives Carolyn Maloney, Where is Carolyn…? Gus Bilirakis…where is Gus? Gus Bilirakis. (applause.) Hello, Gus. Thank you, Gus… doing a great job, and Virginia Foxx. Virginia… where’s Virginia? Hi, Virginia… and the great Howard Lorber, who is not Greek, by the way.

On behalf of my entire administration, I want to extend a very warm welcome to the hundreds of proud members of the Greek-American community. And we have a whole group of people outside who are with us today. I especially want to extend our deep gratitude to His Eminence, Archbishop Demetrios, highly respected and a great gentleman, for joining us in this really beautiful celebration. I hope you are having a good time.

We have been honoring Greek independence here at the White House since 1987, a tradition we know will continue for many, many years. I will only be with you for another seven.

Today, we commemorate the Greek struggle for independence that began on March 25, 1821, after almost four centuries of foreign rule, brave Greek patriots fought to reclaim their freedom, their sovereignty, and their right of self-determination.

The Greek fight for independence enjoyed an outpouring of support throughout the Western world. The citizens of France, Great Britain, the United States, and many other nations were moved to action by a cultural and historical kinship tracing back thousands of years to Ancient Greece, the birthplace of —and you know what this is- democracy. Right? The birthplace of democracy and of, really, Western Civilization.

All around us, here in the United States, we see the profound influence of Greek culture, art, and philosophy.

In the Federalist papers, our founding fathers consulted the wisdom of the Ancient Greek city-states when writing our own Constitution. They learned a lot. They knew what they were doing.

Our nation’s generals, scientists, lawyers, and educators continue to find inspiration in the works of the Ancient Greeks; and throughout this capital city, from the Supreme Court to the Lincoln Memorial to the beautiful, beautiful White House — you like the White House? what a house? …we see the magnificence of Greek architecture.

Finally, we see Greece’s enduring influence through so many Americans of Greek descent, who contributed so much to this nation that we love.

In celebrating Greek Independence, we honor this influence and we remember our common heritage. We take renewed confidence that whatever challenges we might face, anytime in the future, we will face them together —we’ll all be together— as members of a great community of nations.

And like our ancestors, we too will draw strength from the bonds of history and culture that unite our countries and shape our destinies.

Today, we celebrate Greek Independence. Such an important day, and a day that so many people called; they wanted to be here. And many of them were not Greek. So you’ll have to explain that to me… (laughter.) But they wanted to be here… and we renew our commitment to the values and principles that make us who we are. We stand together for freedom and justice and democracy today and for all time.

Thank you for joining us for this incredible celebration.

And now, I’d like to introduce His Eminence to say a few words. Thank you very very much. Thank you all.

HIS EMINENCE ARCHBISHOP DEMETRIOS OF AMERICA

ON THE OCCASION OF GREEK INDEPENDENCE DAY 2018

As a Greek American Community celebrating our annual Greek Independence Day, we are deeply grateful to you Mr. President, for inviting us to the White House to honor again this special day.  By inviting us you honor not only us Greek-Americans, but also all members of the Orthodox Christian Faith.  Even more, you honor the spirit of freedom and human dignity that dwells in the hearts of all humanity.

Our American Declaration of Independence speaks of truths that are self-evident: the equality of all people and their God-given rights, among them the right of liberty, freedom and self-determination.  These truths are ideals that all the great faiths and philosophies have maintained as very important values.

It is a paradox then that such “self-evident” truths are often the ones that we must advocate most passionately and defend most strenuously time and time again, frequently with enormous sacrifices.  The Greek War of Independence that started on March 25th 1821 is a prime example of this.  On that day, the people of the Greek nation had to rise up against their oppressors and fight a long and bitter fight necessitating huge sacrifices in order to gain truths that are self-evident, namely their freedom and independence as individuals and as a nation.

Mr. President, we are grateful that you share these vital American and universal principles.  We kindly ask that you continue to affirm them, all the more in this troubled world.  We further ask for your special care and attention to the continuous injustices suffered by our Ecumenical Patriarchate of Constantinople in matters of full religious freedom.  We humbly request that you speak on behalf of all of us for a fair and equitable solution to the prolonged and tragic division of Cyprus, and to the issue of an appropriate and historically justifiable name of the state of FYROM.

When we celebrate Greek Independence Day, we celebrate a beginning but not a completion. The fight for freedom and human dignity globally is ongoing and unfinished.  For standing with us, Mr. President, for fighting for us, and for speaking universal and eternal truths of life and liberty, we thank you, Mr. President.  We pray for divine favor upon you, the First Lady whose presence honors us today at the White House, and your entire family.  And we close with a beautiful biblical blessing, from the book of Numbers (6:24-26) May God bless you and keep you.  May the Lord shine His face upon you and be merciful to you.  May He lift His countenance upon you and give you peace.