Home/Jurisdictions/Axios! Ordination of Metropolitan Nathanael of Chicago
Previous Next 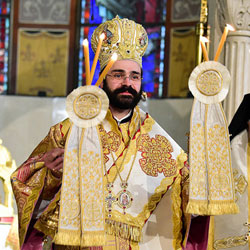 NEW YORK – Metropolitan-elect Nathanael of Chicago was ordained to the Episcopacy at the Archdiocesan Cathedral of the Holy Trinity, Saturday, March 17, according to the apostolic tradition.

His Eminence Archbishop Demetrios Geron of America presided at the services. The Metropolitans, members of the Holy Eparchial Synod, the bishops of the Greek Orthodox Archdiocese and hierarchs from other jurisdictions members of the Assembly of Canonical Orthodox Bishops in the United States, as well as visiting hierarchs from abroad, concelebrated in the Divine Liturgy. In total, sixteen Hierarchs took part in the services assisted by 14 priests and four deacons.

The new Metropolitan, in his ordination address, spoke about the steps that led him to the priesthood. He expressed his gratitude to His All Holiness Ecumenical Patriarch Bartholomew, the Holy and Sacred Synod of the Ecumenical Patriarchate, the Hierarchs of the Holy Eparchial Synod of the Archdiocese and all people who helped and supported him along the way. In addressing Archbishop Demetrios, Metropolitan Nathanael said: “Your Eminence, venerable Elder Archbishop of America, with profound respect and infinite gratitude I thank you for providing me numerous opportunities to serve the Church through important posts, which offered me ecclesiastical experience and the opportunity to demonstrate my devotion to the Church. I am especially grateful that you ordained me a deacon and a presbyter, and today will receive from your honorable hands the grace of the archpriesthood.”

Archbishop Demetrios, in his paternal exhortation to the newly ordained hierarch, drew upon the wise admonitions in the letters of the Great Apostle Saint Paul to Timothy and Titus and asked Metropolitan-elect Nathanael to be a model and an example in attitude, in faith, in love and patience; “Let no one despise your youth, but be an example to the believers in word, in conduct, in love, in spirit, in faith, in purity.” (1 Timothy 4:12)

Axios! (He is Worthy!) exclaimed the Archbishop, the hierarchs and clergy and all the faithful in the congregation at several points during the service. The Ordination service and Hierarchical Divine Liturgy was attended by hundreds of faithful, friends and relatives of the new Metropolitan, some who had travelled from Greece, and representatives of the diplomatic corps of Greece and Cyprus.

Archbishop Demetrios’ Letter to the faithful of the Holy Metropolis of Chicago.