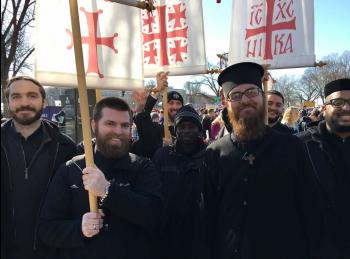 Every year, St Ambrose Society, a pro-life student interest group at St. Vladimir’s Seminary, makes a pilgrimage to Washington, D.C., in order to raise awareness for the protection of the unborn at the March for Life. This year, St. Vladimir’s contingent included more than a dozen representatives, including seminary President Archpriest Chad Hatfield. Many seminarians from St. Tikhon’s Seminary and Orthodox Christians from around the United States—as far away as Seattle, WA—joined together and marched alongside the group from St. Vladimir’s.