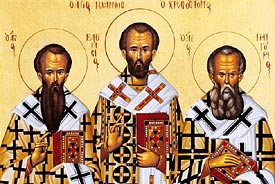 NEW YORK – The Greek Orthodox Archdiocese of America, through its National Department of Greek Education and the Direct Archdiocesan District Office of Education, organizes several events in celebration of the Feast of the Three Hierarchs and the Day of Greek Letters.

The Schedule of Events in chronological order is as follows:

The Three Hierarchs and their contribution to Greek Letters:
Saint Basil the Great, Saint Gregory the Theologian, and Saint John Chrysostom

Part A: Epistolography as Pastoral Care: The Three Hierarchs and the Ancient Art of Letter Writing, a lecture by the Rev. Dr. George Parsenios

Fr. George Parsenios (PhD, Yale University) is Associate Professor at Princeton Theological Seminary, where he teaches courses in Greek, New Testament and the interaction of early Christianity with the classical world. He is the author of three books and is also Sessional Associate Professor at St. Vladimir’s Orthodox Theological Seminary. He serves as priest at St. Demetrios Greek Orthodox Church in Perth Amboy, New Jersey, and resides in Princeton, N.J., with Presbytera Maureen and their three children.

Part B: St. Gregory the Theologian on Human Impasses, a lecture in Greek by His Eminence Archbishop Demetrios, Geron of America

His Eminence Archbishop Demetrios Geron of America will honor the students who excelled in the Comprehensive Examination in Modern Greek and present them with the Three Hierarchs Award of Excellence and an icon of the Holy Three Hierarchs.

Mrs. Athena Kromidas-Tsokou, principal of the William Spyropoulos Greek-American School of St. Nicholas Shrine Church, Flushing, N.Y., will be the featured speaker and will address the students on the “The Three Hierarchs and the Value of the Greek Language.”

A Reception will follow and will take place at the adjacent Cathedral Center.

Archieratical Great Vespers for the Feast of the Three Hierarchs

His Eminence Archbishop Demetrios of America will celebrate the Archieratical Divine Liturgy at the Archdiocesan Cathedral of the Holy Trinity in Manhattan, offered especially for the students, teachers, principals and parents and of the Archdiocesan Greek American Schools. Archbishop Demetrios will address the students on the life and works of the Three Hierarchs and the importance of Greek Letters and Hellenic heritage. Following the Liturgy, the Archbishop will cut the Vasilopita for the teachers and administrators in the adjacent Cathedral Community Center.