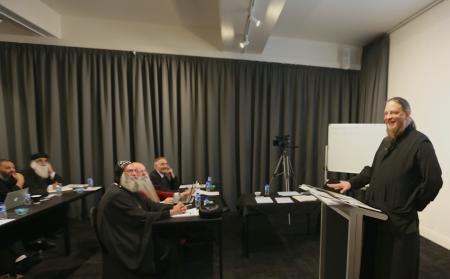 Father John Behr delivering a lecture in Patristics at St. Athanasius Coptic Orthodox College in Australia.Archpriest John Behr, the Father Georges Florovsky Distinguished Professor of Patristics at St. Vladimir’s Seminary, has published a new critical edition and translation of Origen’s On First Principles, together with a lengthy introduction, which is sure to become a significant new resource in the fields of dogmatic theology, church history, and patristic studies. The book is published by Oxford University Press, as part of their Oxford Early Christian Texts series.