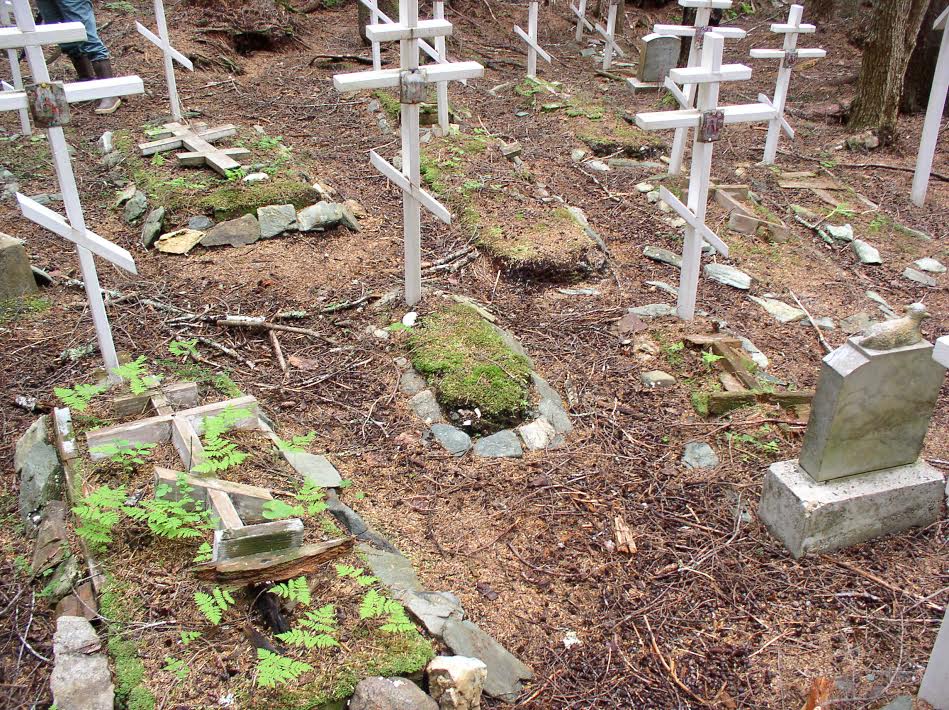 Cemetery in Funter Bay, AK marks graves of many who lost their lives during World War II.

During their retreat held in mid-May 2017 at the Holy Dormition Monastery, Rives Junction, MI, the members of the Holy Synod of Bishops of the Orthodox Church in America adopted a resolution commemorating the World War II internment of the Aleut peoples of the Aleutian and Pribiolof Islands.

“Before the Japanese invasion of Attu and Kiska, Alaska in 1942, nearly 900 Aleuts living in the Aleutian and Pribilof Islands had been forced to resettle to camps in southeast Alaska,” explained His Grace, Bishop David of Sitka and Alaska.  “It was estimated that over ten percent of the evacuees perished during this little-known era of World War II history.”

The text of the resolution appears below.

In 1942, as the Japanese were expanding their attacks on the United States, they sent two carrier groups to the Aleutian Islands in the Alaska Territory.  The purpose was to force the Americans to divide their forces and leave the true objective, Midway, with fewer defenses.  The ruse didn’t work, but the Alaskan defense forces did manage to make the Japanese occupation a brief one.  In the process, the Aleut Natives were removed from their homes and taken to Southeast Alaska for internment for the duration of the war “for their protection.”

There were several problems with this explanation for the move, non-natives did not have to leave, and the internment program was only half thought-out with no real plan for their destination or housing or provisions.  The locations were chosen after they left the Aleutians while the transport ships were underway to “somewhere” away from harm.  They no sooner got underway than they had their first of what would be too many deaths when a new born baby had to be buried at sea in route to Funter Bay.  The approximately 885 Aleuts were divided between five sites, Funter Bay and Killisnoo, west of Admiralty Island; Wrangell Institute, a stopover site on Wrangell Island, southeast of Admiralty Island; Burnett Inlet, a permanent campsite on Wrangell Island; and Ward Cove on Revillagigedo Island.  Meanwhile the occupying troops took advantage of their absence by looting their homes and leaving them with virtually nothing to return to but empty shells.

Whereas during the Second World War the Japanese attacked the Aleutian Islands in June of 1942 by bombing Unalaska/Dutch Harbor and capturing the islands of Attu and Kiska in an effort to divert forces of the United States away from the Midway Campaign of that war;

Whereas under the guise of moving people from harm’s way on the Aleutian Islands, the Aleuts who occupied these islands were removed “for their own protection” and placed in internment camps in Southeast Alaska;

Whereas this month marks the 75th Anniversary of the internment of the Aleut people of Alaska by the United States Government during World War II;

Whereas the internment, managed by the Department of the Interior, the Alaska Fish and Wildlife Service and the Alaskan Office of Indian Affairs was poorly handled and mismanaged, causing hardship, harm and even death to many of the Aleuts they claimed to be helping;

Whereas the people of Attu, being captured by the Japanese remained prisoners of war until the end of the conflict;

Whereas the result of this poor management placed the Aleuts in abandoned canneries and mines not meant to house so many people and not built for protection from winter’s harshness, with inadequate food, unsanitary living conditions and no facilities for bathing or cooking and led to the death of over ten percent of the 885 people interred;

Whereas despite this mistreatment by their own government, these Orthodox Christians persevered with help from the local Tlingit Natives (many of whom were also Orthodox) and endured until the end of the war, burying their loved ones in a land so far from their home;

And whereas this event has gone largely unnoticed by many;

Resolved, that the Holy Synod of Bishops of the Orthodox Church in America, meeting in session at Holy Dormition Monastery in Rives Junction, Michigan

PDFs of the resolution and a listing of those who fell asleep in the Lord in the internment camps are available on-line.

An interesting historical article with photos is also available on-line.