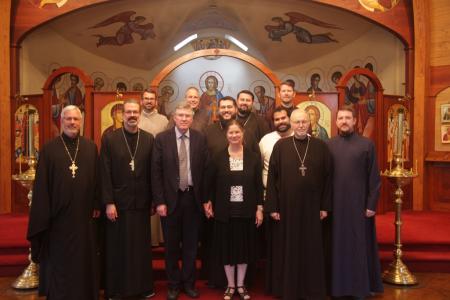 Our nation is engulfed by an addiction crisis. A new study released in 2017 by the American Academy of Pediatrics showed that marijuana-related emergency visits by kids in Colorado have more than quadrupled since the state legalized marijuana for recreational use in 2014. A recent report from the U.S. Surgeon General stated that 27 million people in America last year self-reported the misuse of illegal drugs or opioid-based prescription drugs, while another 66 million (a quarter of the U.S. adult and adolescent population!) reported binge-drinking in the past month. The Surgeon General’s report estimates the yearly annual economic impact from the misuse of prescription drugs, illicit drugs, or alcohol is $442 billion—a figure beyond staggering.

Father Alcuin (Dean) Kellerhouse, who is a student in the Doctor of Ministry (D.Min.) program here at St. Vladimir’s Seminary, has come up with a plan to battle this overwhelming national scourge. For his final D.Min. project—one of his degree requirements—he’s designed workshops to train other ministers how to better understand and address Substance Use Disorders (SUDs). What’s more, he’s offering the training pro bono, both face-to-face and online, to ensure the widest possible opportunities for learning.

Father Alcuin, who holds an M.Div. degree, as well as MLADC  (Master Licensed Alcohol and Drug Counselor) and LCS (Licensed Clinical Supervisor) certifications, has been an addictions professional since 1994.  He is presently the Clinical Supervisor at the South Hills Recovery Project in Bridgeville PA. Active in the Anglican ministry for over 30 years, he was ordained an Orthodox priest in 2015, and he now serves in the Russian Orthodox Church Outside of Russia (ROCOR), under the omophorion of Metropolitan Hilarion.

“After completing this training,” Fr. Alcuin, said, “clergy and ministers will have a set of skills that will allow them to deal with our nation’s crisis as it occurs, on personal, family, and parish levels. We know that in times of crisis, the faithful will turn first to their clergy. My goal for this training is to equip our clergy and lay ministers to be effective when those crises involve SUDs.”

He outlined the educational outcome goals of the program, which encompass those skills, as follows:

1. Have increased comprehension of the biblical and patristic witness concerning the misuse of Substances.
2. Understand the thinking behind the approach of the Diagnostic and Statistical Manual of the American Psychiatric Association (DMS-5) to diagnosis SUDs.
3. Recognize how SUDs may present in pastoral counseling, spiritual relationships, and sacramental ministry.
4. Be able to effectively do a “5th Step” with a person in a 12 Step Recovery program. (Step 5 is: “Admitted to God, to ourselves, and to another human being the exact nature of our wrongs.”)
5. Exercise referral skills successfully, while continuing to offer effective pastoral support to those who suffer with SUDs.
6. Address SUDs presenting in a ministry setting, with confidence, skill, and grace.

“I’m pleased to be in the D.Min. program, which, in the St. Vladimir’s tradition, draws on the best of Orthodox scholarship to provide practical pastoral training,” Fr. Alcuin continued. “The program requires the sharing of our knowledge with the broader Church, and I have already conducted a test workshop for a small group close to my home, and today received calls from 2 OCA Dioceses which are requesting the training.”

“I also witness to hope, the hope that, as St. Paul says, ‘Does not disappoint us,’ (Romans 5.5), because of the love of God that is poured out in our hearts,” he concluded. “I’m here to share that hope and that love through these workshops, and to impart the basic knowledge and skills needed to battle this truly demonic force over human beings. I am profoundly grateful to the Danilchick Family Endowment for its support of this crucial work.”

Note: Workshops and equivalent online training will be offered pro bono. Fr. Alcuin would simply require reimbursement for travel and lodging. Online training will be based on a publication of the Substance Abuse and Mental Health Administration (SAMSHA) as its text. To arrange for a full, half-day or online workshop please contact Fr. Alcuin directly via email: Dkellerhouse@svots.edu or phone: 603.937.0665.

The Danilchick Family Endowment for Pastoral Studies offers need-based financial aid for Doctor of Ministry Students. Recipients of funding from the Danilchick Family Endowment for Pastoral Studies agree to give special diocesan and/or parish workshops and/or seminars in their particular areas of pastoral study. At least one such workshop or seminar shall be given by each scholarship recipient in each year they receive aid from this endowment.