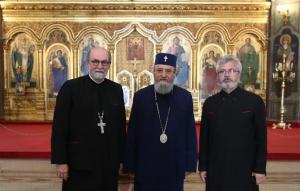 Seminary President Archpriest Chad Hatfield met with the Faculties of Orthodox Theology in the cities of Sibiu and Bucharest, Romania, in an effort to encourage future student and faculty exchanges and co-publications between St. Vladimir’s Seminary and those two major theological centers. Father Chad, who traveled throughout Romania June 9–21 with the blessing of His Beatitude Daniel, patriarch of the Romanian Orthodox Church, formed both personal and institutional ties with educational leaders in that country. Father Chad was accompanied in his travels by Alexandru Popovici, a native Romanian, who completed his Master of Arts degree in 2016 at St. Vladimir’s, and who now is employed as Director of Web Services at the Seminary.

On June 16, His Eminence Laurentiu [Streza], archbishop of Sibiu and metropolitan of Transylvania, gave Fr. Chad and Mr. Popovici a tour of the Metropolitan Cathedral and faculty compound at the Andrei Saguna Faculty of Orthodox Theology in Sibiu, and also held a meeting with them in his private residence. 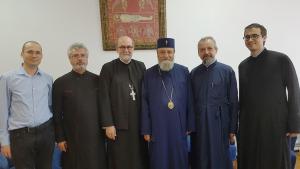 Archpriest Chad Hatfield meeting with​ professors of the​ Faculty of Orthodox Theology​ in ​ Sibiu“Archbishop Laurentiu,” said Fr. Chad, “is devoted to the works of Protopresbyter Alexander Schmemann, our seminary’s former longtime and globally influential Dean. “His Eminence, in fact, used to teach liturgics, and he is anxious to renew the bond between St. Vladimir’s liturgical legacy and the professors of theology in Sibiu,” explained Fr. Chad, “especially placing emphasis on the relationship between liturgical life and pastoral care.” 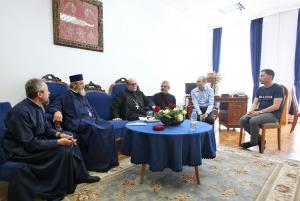 “As well, both the Dean and Vice-Dean showed tremendous interest in our Theological Quarterly—(We exchanged copies of our academic quarterlies!)—all of which demonstrates the possibility of future faculty reciprocity,” Fr. Chad continued.“Our conversations were deeply and mutually enriching, and we’ve already begun to envision a future symposium on Missiology, as well as co-publications through our St. Vladimir’s Seminary Press.”

The Andrei Saguna Faculty of Orthodox Theology in Sibiu is the oldest institution of its kind in Romania, and its founding marked the beginning of higher education in Sibiu. Founded in 1786 as a Theological School and restructured in 1811 under the leadership of Gheorghe Lazar, it has continually operated up to the present time. Between 1948 and 1990, it functioned under the name of “The Theological Institute of Higher Education,” being one of the two Orthodox theological schools of higher education in Romania that trained Orthodox priests. Since 1991 it has been part of the “Lucian Blaga” University of Sibiu. Faculty members are known for their preservation of Transylvanian Orthodox traditions, while having the ability to adapt to the demands and needs of contemporary society. Furthermore, the Faculty of Theology is actively engaged in ecumenical work, both at a national and European level. 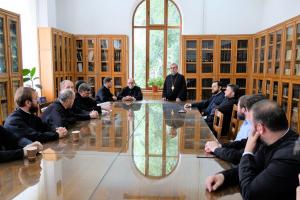 On June 19, Fr. Chad visited the Faculty of Orthodox Theology of Patriarch Justinian at the University of Bucharest, to review a formal agreement first signed between the Seminary and the Romanian faculty in 2013. In revisiting that original agreement, the two parties appraised existing protocols regarding student and faculty exchanges, and refined them to make their cooperative efforts more mutually efficient and productive.

Priest and Professor Ştefan Buchiu, faculty dean, noted that in recent years two graduates of the Faculty of Theology in Bucharest had pursued further studies at St. Vladimir’s, “with brilliant results.” (The two students referred to are Mr. Popovici and Bogdan Neacsiu, Class of 2015.) He also noted that in 2018, the collaborative efforts outlined in the 2013 agreement will have reached a five-year anniversary mark, and that with the blessing of Patriarch Daniel, the original agreement would be renewed during a formal ceremony in that anniversary year. 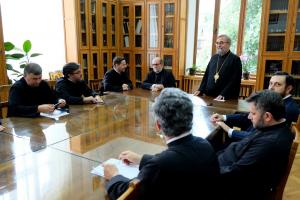 The legal status and structure of the Faculty of Theology in Bucharest mirrors the political history of the country of Romania. Following the Union of the Romanian Principalities under Alexandru Ioan Cuza, the grand opening of the Faculty of Theology at the University of Bucharest took place November 12, 1881. In 1948, the Faculty was reorganized into the Theological Institute, and removed from the university, but in Academic Year 1991–1992, the Institute was returned to its initial status as a specialized Faculty of the University of Bucharest.

In Academic Year of 2005–2006, the educational structure of the Faculty of Theology was realigned in accordance with the provisions of the Bologna Charter, to which Romania adhered as part of its integration into the European Union. Consequently, under the general umbrella of Orthodox Theology were placed four specializations: Pastoral Theology, Didactic Theology, Social Theology, and Sacred Art; and Bachelor, Master, and Doctoral degrees were offered. 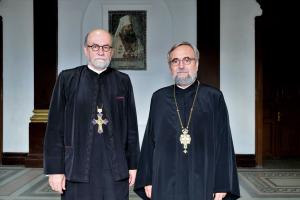