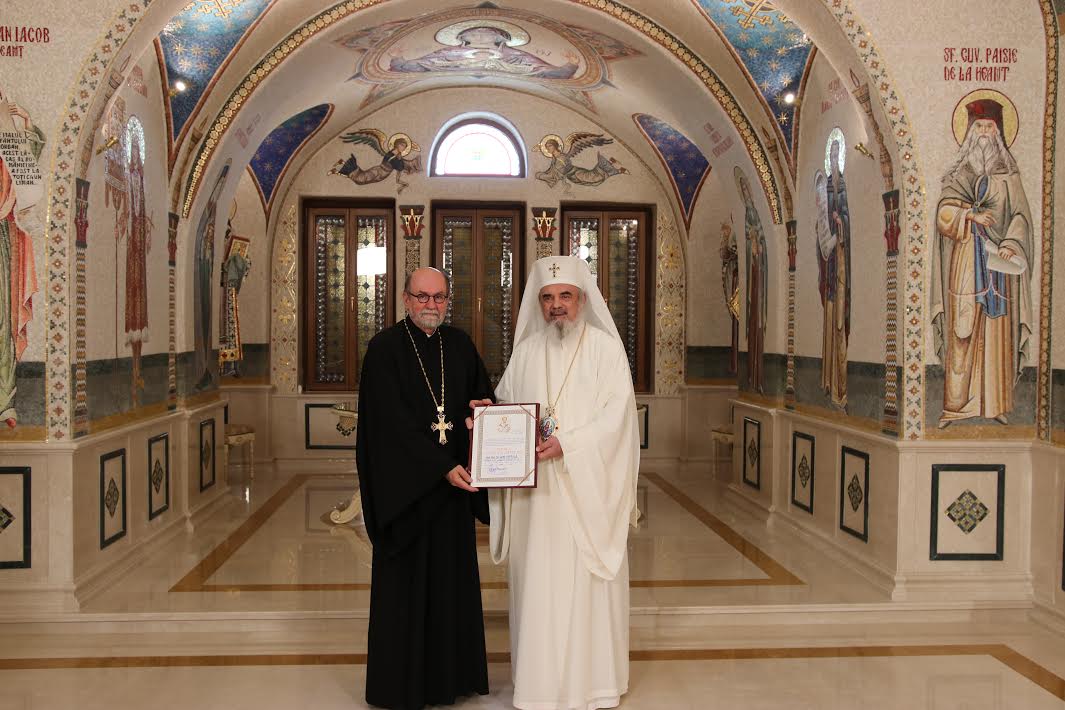 The President of Saint Vladimir’s Orthodox Theological Seminary [SVOTS], Archpriest Chad Hatfield, recently returned from a visit to Romania June 9–21, 2017, during which he met with key figures instrumental in renewing collaborative efforts between educational institutions of the Romanian Orthodox Church and SVOTS.  Cooperative ventures began in 2013, when SVOTS and the Faculty of Orthodox Theology at the University of Bucharest signed a formal agreement allowing for student and faculty exchanges, dialogue, and co-publications.

Of particular importance was the reception of Father Chad by His Beatitude, Patriarch Daniel at the Patriarchal Residence on June 12, a meeting that centered on the topic of mission and evangelism.

“The Romanian Church has a strong interest in missionary outreach, and is particularly interested in the dynamism of American evangelism and how it might be ‘translated’ into catechetical work in Romania,” reported Father Chad, who teaches Pastoral Theology and Missiology courses at Saint Vladimir’s.  “I have greatly admired the theological, pastoral, and missionary spirit of Patriarch Daniel, and so I sought His Beatitude’s blessing and counsel as we reconnect in our mutual efforts in these areas, both on the American continent and in Romania.”

Patriarch Daniel in turn thanked Father Chad for supporting young Romanian Orthodox theologians studying at Saint Vladimir’s, and as an expression of gratitude, he presented Father Chad with the “Saint John Chrysostom Cross and Award for Theological Education,” the Romanian Patriarchate’s highest honor in that field.

During his time abroad, Father Chad also offered the homily for All Saints Sunday in Bucharest’s Church of Saint Paraskeva, pastored by Father Michael Tita, who also is personal counselor to Patriarch Daniel regarding Foreign Affairs and Inter-Church Relations.  He visited the construction site for the new cathedral scheduled to be built and named after the Apostle Andrew, which will be the seat of the Patriarch’s throne.  He also visited several renowned monasteries, as well as an orphanage that has been supported by members of the seminary’s Three Hierarchs Chapel for the past nine years.  Finally, he formally renewed the 2013 agreement between Saint Vladimir’s Seminary and the Faculty of Orthodox Theology in Bucharest, headed by Archpriest Stefan Buchiu, Dean, and visited the Faculty of Orthodox Theology in Sibiu.

“As I travel around this country, I am amazed at the quality and volume of the media coverage in Romania, as regards Church news,” Father Chad observed.  “It is remarkable that Orthodox Christians receive such heightened professional publicity — compared to their US counterparts! — and I am gratified that this, too, is a means to spread the Gospel.  I hope to learn from our Romanian friends how to better use the media in our own evangelical efforts.”

Father Chad was accompanied during his travels by Alexandru Popovici, a native Romanian, who completed his Master of Arts degree in 2016 at Saint Vladimir’s and who now is employed as SVOTS’ Director of Web Services.