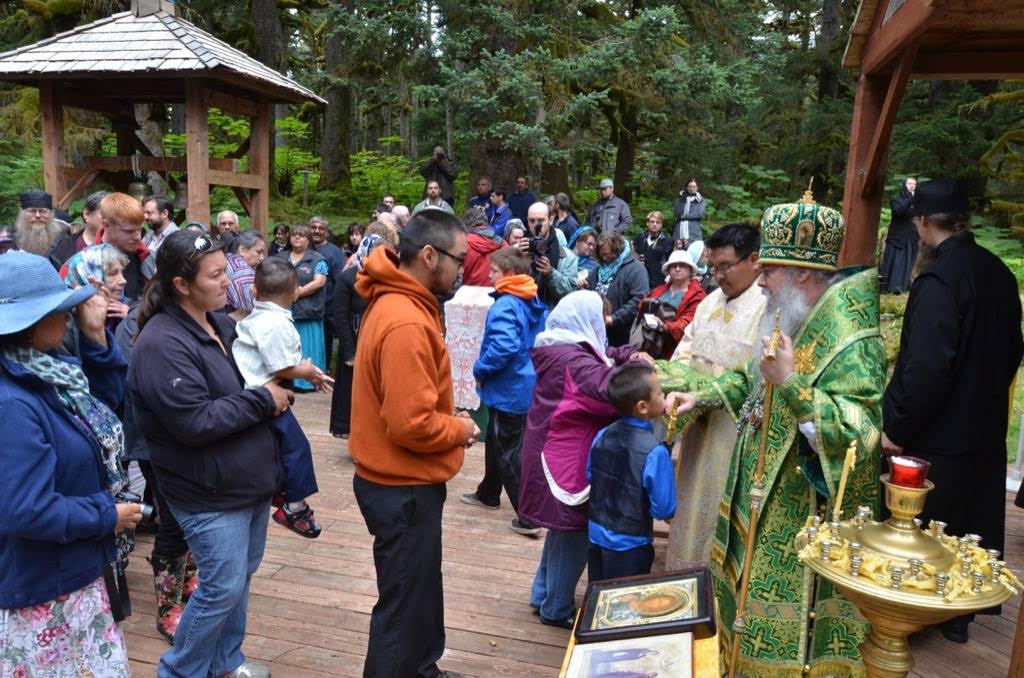 Metropolitan Tikhon blesses pilgrims during the 2015 pilgrimage to Spruce Island.

According to the Orthodox Church in America’s Diocese of Alaska, the pilgrimage will open on Monday evening, August 7, with the celebration of the Akathistos Hymn in honor of Saint Herman at Kodiak’s Holy Resurrection Cathedral, in which his relics are enshrined.  The annual Bishop’s Tea will follow.

On Tuesday, August 8—the Feast of Saint Jacob Netsvetov—the Hierarchical Divine Liturgy will be celebrated at Holy Resurrection Cathedral.  A grand banquet and introduction of pilgrims will follow at the Afognak Native Corporation Hall.  Vigil will be celebrated in the evening.

Boats will depart Kodiak for Monk’s Lagoon on Spruce Island early on the morning of Wednesday, August 9—the Feast of Saint Herman.  The Hierarchical Divine Liturgy will be celebrated at Saints Sergius and Herman of Valaam Chapel.  The original log chapel was built in 1805, while the present structure dates to 1898.  The chapel marks the burial site of Saint Herman.  After the Liturgy, pilgrims will enjoy a picnic lunch before returning to Kodiak, where they will partake of a light soup dinner at Holy Resurrection Cathedral.

The pilgrimage schedule is subject to revision.  Check the Diocese of Alaska’s web site for updates and additional information.