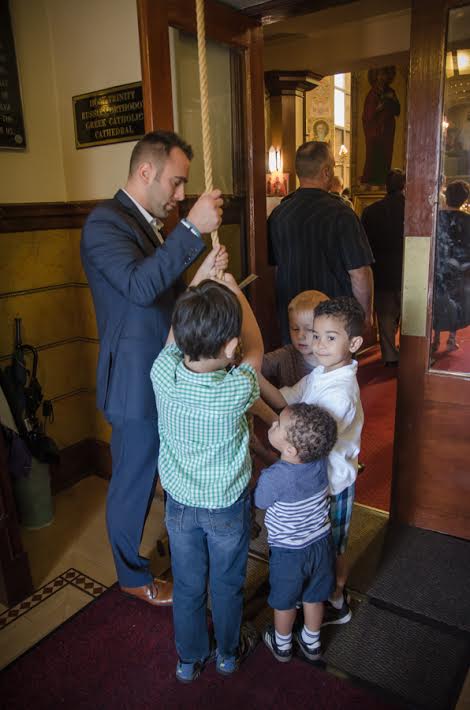 According to parishioner Larisa Fetterly, the weekend celebration began on Saturday afternoon, June 10 as the cathedral’s Dean, Archpriest John S. Adamcio, offered a tour of the historic cathedral, designed by renowned American architect Louis H. Sullivan.  The cathedral has been blessed to have had several saints worship in its sanctuary, including Saints John [Kochurov] of Chicago, Tikhon the Confessor of Moscow and Alexis Toth.  After the celebration of the Vigil, a light dinner was served in the cathedral hall, allowing for fellowship with many visitors from Chicago area parishes and guests from as far away as New York and Texas. 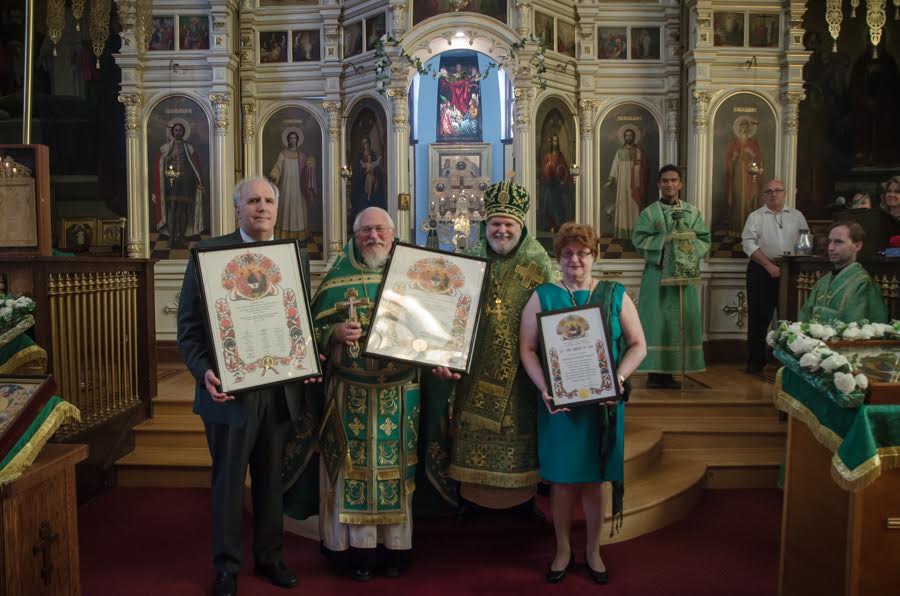 Gramotas presented by Bishop Paul and the Holy Synod.

On Sunday, June 11, His Grace, Paul, Bishop of Chicago and the Midwest, presided at the Hierarchical Divine Liturgy, during which he elevated Deacon Thomas Keith to the dignity of Protodeacon.  In his sermon, Bishop Paul encouraged the parish to make life choices that are Christ-centered and offer the opportunity to be present at worship and doing God’s work.  The service concluded with the presentation of gramotas to Archpriest John S. Adamcio, in recognition of his retirement after 17 years of service to the cathedral; to Matushka Melania Adamcio for her many years of service to the cathedral and the Saints Martha and Mary Sisterhood; and to the faithful of Holy Trinity Cathedral on 125 years of Orthodoxy in Chicago.

At the banquet which followed at the Carlisle in suburban Lombard, IL, Parish Council President Dennis Pelak served as the Master of Ceremonies and announced that the parish would be donating $2,000.00 to the Diocese of the Midwest to help a struggling parish so that it might have the blessing of reaching its 125 year milestone as well.  Father John Adamcio spoke of his hope and prayers for the parish community to love each other.  Bishop Paul asked the parishioners under 30 years old to stand, and spoke of the importance of this generation – today’s parish – and the importance of supporting their participation in the life of the Church.  Throughout the event, attendees had an opportunity to view parish memorabilia and a rotating slide show of photos depicting parish life spanning multiple generations. 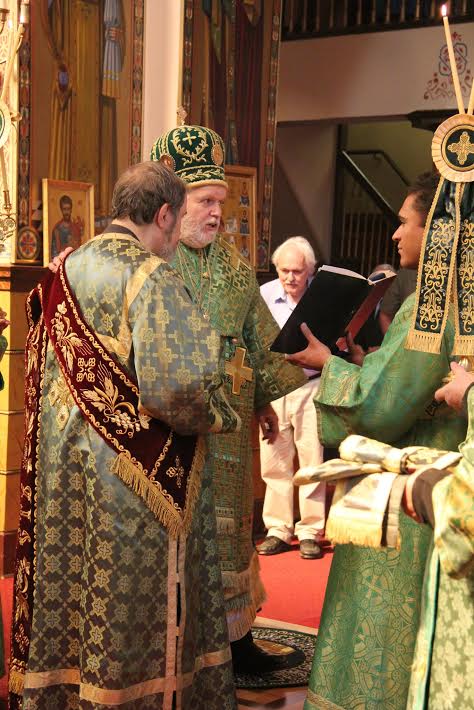 Deacon Thomas Keith is elevated to the dignity of Protodeacon.

What is today Holy Trinity Cathedral traces its roots to the establishment of Saint Vladimir’s Church — believed to be the first Orthodox Christian parish in Chicago — in 1892.  Services initially were held in a house on North Noble Street and later in a rented home on Armitage [then Centre] near Racine.  In 1899 the church’s pastor, Father [now Saint] John Kochurov, commissioned Sullivan to construct a church at 1121 North Leavitt Street in Chicago.  The new church was consecrated by Saint Tikhon of Moscow in 1903 and designated a cathedral in 1922.  After his return to Russia, Father John became the first clergyman to be martyred at the outset of the Bolshevik Revolution.  He was glorified as Saint John of Chicago and Tsarskoye Tselo in December 1994.

In its early years, the cathedral parish served as a catalyst for the establishment of several other Orthodox.  It stands today as the center of religious life for many Orthodox faithful and their families and serves as the See Cathedral of the Diocese of the Midwest of the Orthodox Church in America.  It was listed on the National Register of Historic Places in 1976 and designated an official City of Chicago Landmark in 1979.