Home/Seminaries/Reflections on the Concordia Summit in Athens
Previous Next 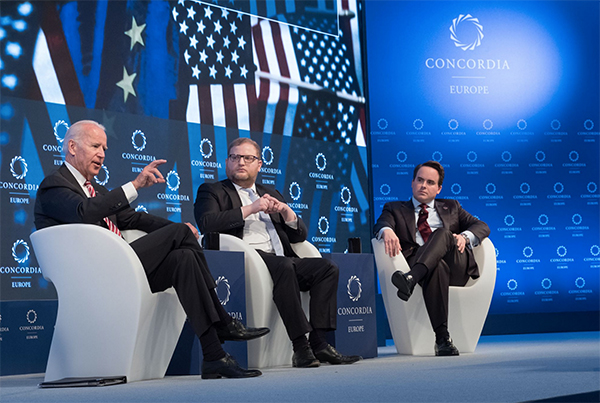 I was truly fortunate to participate in the Concordia Summit, held in Athens June 6-7, as one of five students representing Hellenic College Holy Cross Greek Orthodox School of Theology. Our President, Rev. Fr Christopher Metropulos, guided us—both spiritually and academically—through a tremendous educational as well as social journey.

Powerful men and women from highly successful private companies, as well as speakers prominent in the public sector in Greece and abroad, both from Church and government, along with a plethora of highly interesting participants from all over the world, engaged in the Summit by sharing information and ideas, expressing personal experiences, and most importantly, addressing sensitively the reality of painful problems such as Greece’s high unemployment rate and the refugee crisis.

The President of the Hellenic Republic, Prokopis Pavlopoulos, opened the Summit by reassuring attendees that “Greece is going to remain in the European Union.” José Manuel Barroso, former President of the European Commission, offered a long interview to noted Greek journalist Alexis Papachelas on his experience and views concerning social and political issues in Europe and worldwide. Muhtar Kent, Chairman of The Coca-Cola Company, spoke about the best practices and hopeful goals of an extremely successful company. Former Vice President of the United States Joseph Biden gave a strong speech, stating among other significant remarks, “If we don’t fight for ourselves and our values collectively, no one else will.” He also said, “Be careful of the Greeks—once they get into your heart, they capture you.”

A special speaker who chose to address his audience in a radical, heartfelt, deeply Greek way was George M. Logothetis, Chairman and CEO of the Libra Group and Chairman of Concordia’s Leadership Council, who said, among other notable things, “Greeks are ordinary heroes….” and his audience rose to their feet and applauded loudly.

His All-Holiness Ecumenical Patriarch Bartholomew offered remarks on facing difficult problems as societies and individuals, working on and hoping for sustainable solutions.

A real, heroic, tortured, and still strong presence was that of Amandu, a 17-year-old Syrian who survived atrocities in his war-torn country to share with us his story, his drama, his innocent and both painful and hopeful expression.

Another special note about a special lady: Nitzia Logothetis, psychotherapist and founder of the Seleni Institute, arrived in Athens just after she had visited the island of Chios and the refugee camps there. She gave us a straightforward, heartfelt hit right at the center of our hearts and dignity: “ Welcome to hell on earth… Kids two-and-a-half or four years old cannot sleep at all during the nights…They urgently need psychotherapists…They are psychotic…due to their exposure to extremely high levels of stress.” No comments. Just some tears.

The Prime Minister of the Hellenic Republic, Alexis Tsipras, concluded the Summit by saying that the Greek economy is on its way to recovering.

Concordia taught us that partnerships can overcome problems and open up a sustainable future for all people, but mainly for youth, children, and those less fortunate. Concordia taught us that our school’s mission is on the right way: We offer an educational orientation towards sensitivity, awareness, faith in Orthodoxy, in family, in self, in our fellow man. Both servants and leaders of a changing world, our students and graduates can focus on the importance of the human psyche and on effective collaboration in order for humanity to experience peace and love.

At the Summit in Athens, we acquired knowledge, resources, social awareness, unique experiences, strong feelings, firm faith, and new friendships. We renewed our respect for our amazing school and its mission. We had the opportunity to spread the word about our school’s unique principles and values. Last but not least, we felt, once again, absolute trust in our wonderful President, Fr. Metropulos, who repeatedly proves the words right: “It’s all about the students.”