In the Spirit of Pentecost:&nbsp; SVOTS students minister in Guatemala

Home/Jurisdictions/In the Spirit of Pentecost:&nbsp; SVOTS students minister in Guatemala
Previous Next

In the Spirit of Pentecost:&nbsp; SVOTS students minister in Guatemala 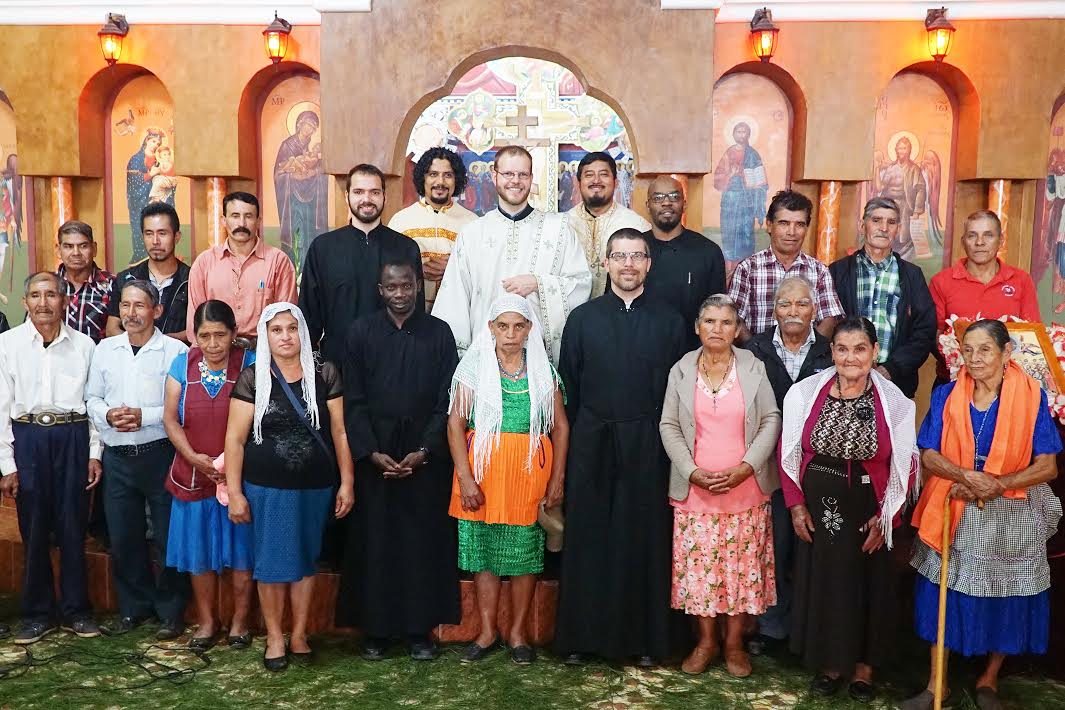 Five students from Saint Vladimir’s Orthodox Theological Seminary—among them a recent graduate—ministered in Guatemala May 22 through June 2, 2017, as part of an Orthodox Christian Mission Center mission teaching team.  Deacon Christopher Moore, Anthony Davis, Simon Menya, Hans Vomend, and Christopher Stoops (M. Div. Class of 2017) offered religious education and catechism classes and encouragement to Church leaders, seminarians, and young adults as their team wound its way through the provinces of Hueheutenango and Escuintla, culminating at Lake Amatitlan.

After landing in Tuxtla Gutierrez, Mexico, team members were met by SVOTS alumnus Jesse Brandow, an already established missionary working in the Mayan Orthodox Christian communities under the Ecumenical Patriarchate.  Together they traveled into Guatemala, where they were greeted with a customary explosion of confetti at Annunciation Cathedral in Aguacate.  Deacon Christopher served with the Rector, Father Evangelios, during a Divine Liturgy as the other seminarians helped to sing the service.

The team’s next stop was a two-day catechetical retreat for some 80 lay leaders from across the Guatemalan parishes.  The seminarians taught all the lessons during the two-day gathering, using Jesse as their translator.  Anticipating the coming of the Feast of Pentecost, their teaching centered around the gifts of the Holy Spirit and the guidance of the Holy Spirit in the Ecumenical Councils.  Hans recounted the story of Saint Moses the Black, which captured people’s imagination and inspired them.  The seminarians presented beautiful icons of the Feast of Pentecost to parish leaders.  Team members also met Father Daniel, another priest under the Ecumenical Patriarch, and visited his parish in Pebilpam.

After conducting the retreat, the team visited an Orthodox parish community in the mountainous area of Tajumulco, Guatemala, sharing in fellowship with the lay parish leaders and the rector, Father Alexios Sosa. The seminarians wound their way down narrow mountain roads to the low-lying coastal province of Escuintla, where they met Fathers Blas and Mihail, Vicar of the Greek Orthodox parishes in Guatemala, and spoke with students at the Centro Pedagógico, an Orthodox-run school founded by thelate Father Andrés Girón, who brought thousands of Mayan Christians into the Orthodox Church.

The team’s travels culminated with a visit to the location where Orthodoxy first blossomed in Guatemala—the Monastery of the Holy Trinity on Lake Amatitlan, where they spent time with Igumeni Madre Inés, Abbess and Spiritual Mother of the Hogar Rafael Ayau orphanage.  Mother Inés presented a formal class to increase the team’s knowledge about the history of her country, also introducing them to her monastery’s work with orphans as well as the on-line IEIRA University, which she founded.

“This team’s journey through Guatemala was a fantastic success,” said Jesse.  “We are so thankful to the seminarians, to Saint Vladimir’s Seminary, and to OCMC for making this team possible.  It was such a joy to see the seminarians both learn from and teach the faithful in Guatemala.  I simply loved having this team!”