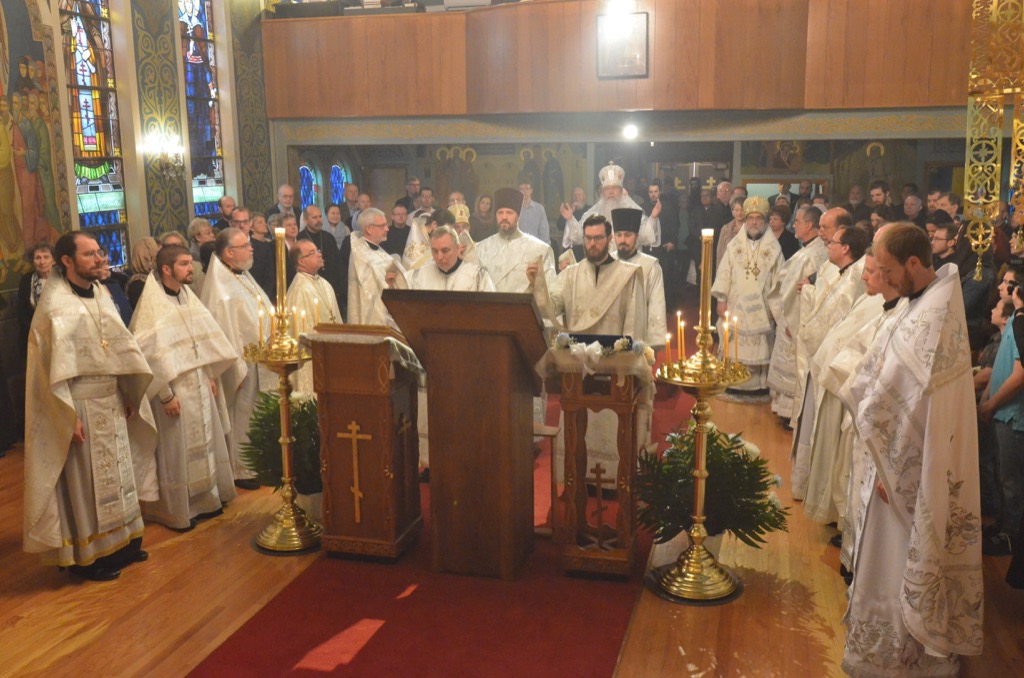 Archimandrite Sergius and the Brotherhood of Saint Tikhon’s Monastery welcomed pilgrims “from near and far” at the 113th annual Memorial Day Pilgrimage May 26-29, 2017.

His Beatitude, Metropolitan Tikhon, presided at the pilgrimage’s official opening on Friday, May 26 as the Myrrh Streaming Hawaiian Icon of the Iveron Mother of God was welcomed and brought into the Monastery Church of Saint Tikhon of Zadonsk.  Many pilgrims were anointed at the conclusion of the opening Molieben.  The icon was available throughout the weekend for veneration by hundreds of faithful.

On Saturday, May 27, Metropolitan Tikhon presided at the Hierarchical Divine Liturgy and, in the afternoon, the 75th Commencement of Saint Tikhon’s Seminary, during which His Grace, Bishop Thomas of the Diocese of Charleston, Oakland, and the Mid-Atlantic of the Antiochian Orthodox Christian Archdiocese of North America addressed the graduates and was awarded a Doctorate of Divinity Honoris Causa.  See related story. 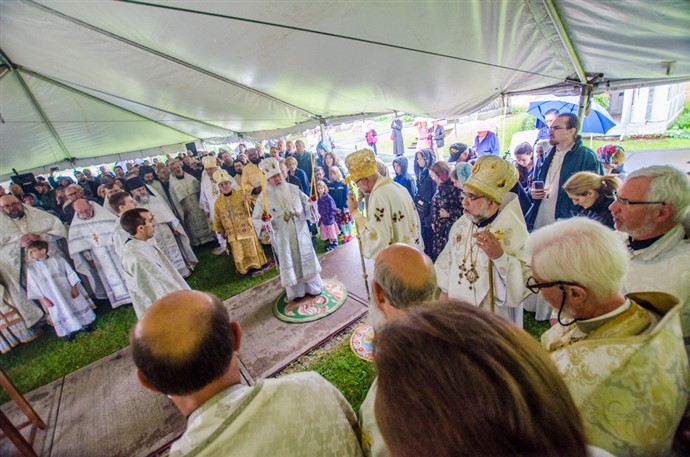 “We have just completed the bright Paschal season and are awaiting the Great and Last Feast of Pentecost,” Metropolitan Tikhon said in his stirring homily at the Hierarchical Divine Liturgy on Memorial Day—Monday, May 29.  “All of us who are devoted to the life of the Church have some pangs when we bide farewell to the Paschal season.  And yet as Saint John of Kronstadt said, the Resurrection remains with us, as Christ remains with us.  Saint John poses the question, ‘What has Pascha left in our souls?’  On this Memorial Day, perhaps what Pascha might leave in our souls are the words of the Paschal verses: ‘Let us call ‘brothers’ even those that hate us, and forgive all by the Resurrection.’  That would be a worthy memory, a worthy celebration of Memorial Day, to guide us daily through the ups and downs of life throughout the year.

“May this be granted to us through the prayers of our Holy Founder and Confessor for the Faith, Saint Tikhon, together with all the Holy Saints who have walked these hallowed grounds; by the intercessions of the Mother of God, whose wonderworking icon from Hawaii is gracing us during this Pilgrimage; and through the life of the Holy Trinity, One God in Three Persons, Who is worshipped by all of us who are pilgrims on a journey towards the Heavenly Kingdom,” Metropolitan Tikhon concluded.

Among the other services celebrated on Memorial Day were a Panikhida for departed veterans and the Anointing of the sick, infirm and all pilgrims.  The Akathistos Hymn in honor of Saint Alexis Toth, whose relics are enshrined in the Monastery Church of Saint Tikhon of Zadonsk, was sung the same afternoon by a group of seminarians, a video of which is available for viewing.

In related news, Metropolitan Tikhon was delighted to receive Archimandrite Pimen of the Diocese of Khust and Vinohradova of the Ukrainian Orthodox Church, who traveled to the United States for the pilgrimage to venerate Saint Alexis’ relics.  Located in western Ukraine near the Slovak and Hungarian borders, the Diocese of Khust is in the area in which Saint Alexis was born and ministered prior to his arrival in the US in the 1880s.  Metropolitan Tikhon presented a relic of Saint Alexis to Father Pimen, a gift to His Eminence, Metropolitan Mark of Khust and his diocese.  Reflecting on how for many years, Orthodox Christians from the US made pilgrimages abroad to venerate the relics of the saints, Metropolitan Tikhon remarked that it is “something wonderful to see pilgrims from Europe coming to America to venerate our saints!”

Throughout the weekend, pilgrims flocked to the monastery not only for services and spiritual refreshment, but to pray at the graves of loved ones, visit the Metropolitan Museum and Icon Repository, and engage in fellowship with old and new friends alike.

Photo galleries are available on the OCA web site, on Facebook, and on the web site of Saint Tikhon’s Monastery.