The Value of “Spiritual Genius”

The Value of “Spiritual Genius” 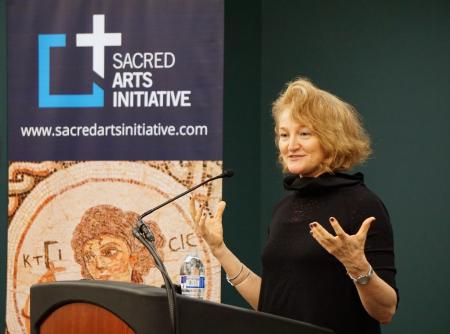 Krista Tippett, host of On Being, lectures about the value of spiritual genius (photo: Adrienne Soper)Krista Tippett, host of On Being—a Peabody Award-winning radio show that explores some of humanity’s oldest philosophical questions—recently presented a public lecture on our campus, titled, “Mystery and the Art of Being.” The lecture, funded by a grant from the Henry Luce Foundation, was arranged by Professor Peter C. Bouteneff, director of the Sacred Arts Initiative at St. Vladimir’s, in an effort to explore ways to engage the wider culture in conversations about faith and spirituality.

In her presentation, Ms. Tippett focused on a phrase coined by physicist Albert Einstein: “spiritual genius.” She paraphrased a startling quote from that great scientist, saying, “Spiritual genius is more necessary to the dignity, security, and joy of humanity than the purveyors of objective knowledge.”

Ms. Tippett then went on to define the recurring qualities of “spiritual genius,” as detected among the “wisest people” she’s ever interviewed—and this graduate of Yale Divinity School and former political journalist for The New York Times and Newsweek has interviewed many. A bevy of larger-than-life theologians, poets, scientists, writers, academics, politicians, and artists have opened the depths of their souls to her: from astrophysicist Mario Livio to Holocaust survivor Elie Wiesel; and from Black Lives Matter co-founder Patrisse Cullors to founder of the media network TheBlaze, Glenn Beck. Among their seemingly polarized beliefs and dogmas, Ms. Tippett has managed to hear echoes of common human experience, while honoring the complexities and perplexities that mark their unique spiritual paths.

Lecture attendees eagerly question Krista Tippett about her talk, titled, “Mystery and the Art of Living” (photo: Adrienne Soper)During her campus lecture, which was based on her newly published volume, Becoming Wise: An Inquiry into the Mystery and Art of Living, Ms. Tippett outlined three broad areas that denote “spiritual genius”—embodiment of spirituality, acceptance and integration of failure, and the practice of virtues. She then deftly expanded upon each point, while emphasizing what she terms the “reality-based nature of spirituality.”

“‘Spiritual genius,’” she began, “is not merely spiritual; it is embodied, experiential, sensate, rooted and flesh and blood and time and space…body, mind, and spirit are more entangled than we guessed…more interactive in every direction. For most of history, religion was a full-body experience, which the Orthodox never forgot; rituals tether emotion in flesh and blood and bone, and they help to release it, and they embody memory in communal time.”

Further, she noted, “Failure and imperfection are the very element of human vitality and wisdom…saints wrestled with darkness in themselves and in the world all of their days. How we carry what has gone wrong for us, integrating it as part of our wholeness, and not merely overcoming it, is essential to being at home in ourselves and to be meaningfully present and compassionate to others, and to the world, in its flaws and failings. What has gone wrong for us, in fact, becomes part of our gift to the world.” 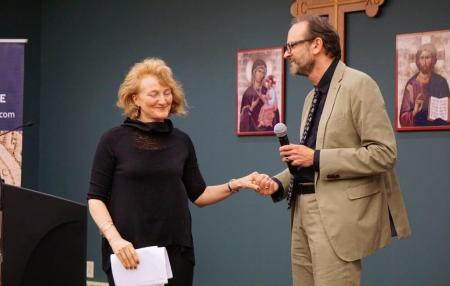 Professor Peter C. Bouteneff, director of the Sacred Arts Initiative at St. Vladimir’s, warmly thanks Krista Tippett at the conclusion of her presentation.Lastly, she likened virtues to ‘spiritual technologies,’ particularly naming the qualities of listening, beauty, joy and humor, gratitude, and goodness as capable of uplifting not only a person’s soul but also the collective spirit of the surrounding community, if they are practiced as a spiritual discipline. She observed the depressing effects of 24/7 media news cycles on human beings, and offered a remedy to the dour outlook created by them, saying, “Virtues are at the heart of ‘spiritual genius.’ Our world is abundant with often quiet, hidden lives of beauty and courage and goodness; there are millions of people at any given moment, young and old, giving themselves over to service, risking hope, and all the while ennobling us all. And, you know some of these people, and you are some of these people.

“We live in an intensely wondrous, stressful, mysterious age,” she concluded. “These qualities of wise living that I’ve discovered in others are accessible to each and every one of us. They can be pursued with the certainly imperfect, often perplexing, raw materials of each of our lives. And if we pursue these things, in ourselves and in our families and communities, we will begin to move through the world differently; we might know what the Apostle Paul calls the peace of God (Philippians 4.7), and share that in the world that we can see and touch.”

At the end of her lecture, Dr. Bouteneff thanked Ms. Tippett, saying, “As a seminary our work is in about talking about God, about joy and goodness, and the virtues, and you have shown us that we can talk about that in ways that are far more accessible and far more universally understandable. We have so much to learn from what you do.”