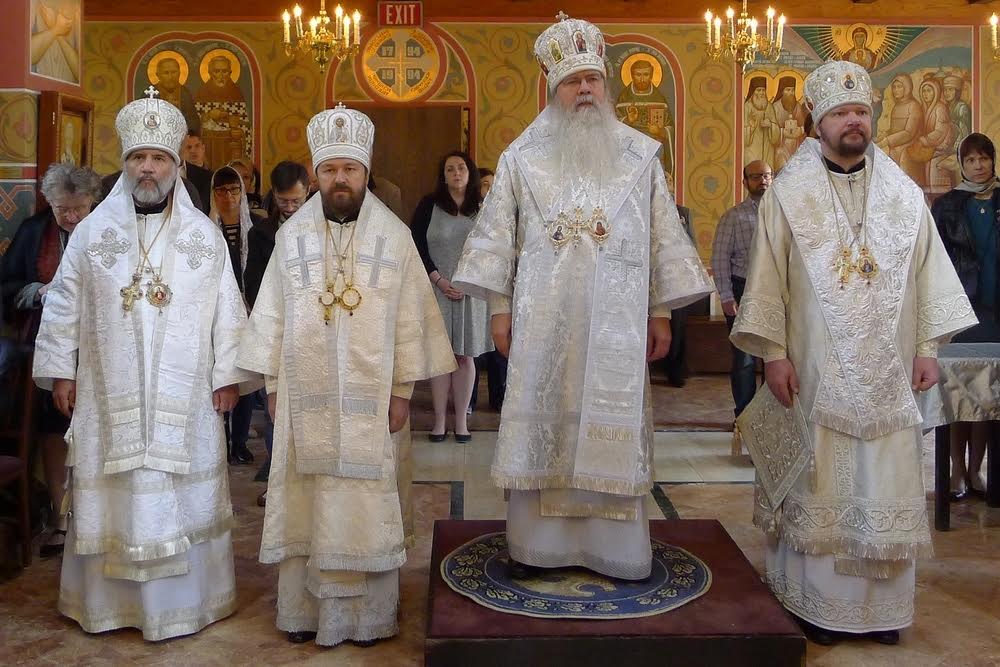 His Beatitude, Metropolitan Tikhon welcomed His Eminence, Metropolitan Hilarion [Alfeyev] of Volokolamsk, Chairman of the Department of External Church Relations of the Patriarchate of Moscow, at Saint Nicholas Cathedral here on Sunday, May 14, 2017.  Concelebrating with the Metropolitans were His Grace, Bishop John of Naro-Fominsk, Administrator of the Patriarchal Parishes in the USA and His Grace, Bishop Daniel of Santa Rosa.

Metropolitan Hilarion headed the Russian Orthodox Church’s delegation at “Martyrs for Christ,” the World Summit in Defense of Persecuted Christians, sponsored by the Billy Graham Evangelistic Association in the US capital May 10-13.  Metropolitan Tikhon addressed the Summit’s opening, while Metropolitan Hilarion spoke at its third plenary session.  Bishop John was a member of the Moscow Patriarchate’s delegation, together with Archpriest Nikolai Danilevich, Vice-Chairman of the Department for External Church Relations of the Ukrainian Orthodox Church; Hieromonk Ioann [Kopeikin], Vice-Rector for Academic Affairs at Moscow’s Saints Cyril and Methodius Church Post-Graduate and Doctoral School; and Archpriest Yaroslav Lutoshkin of Saint Nicholas Patriarchal Cathedral, New York, NY.

During the Divine Liturgy, at which Metropolitan Hilarion delivered the homily, Metropolitan Tikhon ordained Subdeacon Igor Panyutin to the Diaconate.  A graduate of the Orthodox Church in America’s Diaconal Vocation Program, Deacon Igor and his wife Irina are long-time members of Saint Nicholas Cathedral.  Metropolitan Tikhon appropriately quoted the late Metropolitan Leonty—the day coincided with the 52nd anniversary of his repose—in offering encouragement to the newly ordained Deacon:  “The missionary pastor must emerge from our seminary as the Apostle of Orthodoxy, the warrior for the Church of Christ on the American battlefield, fully capable in the best way possible to be simultaneously the guardian of the flock, its leader, the fighter for its interests, and the ‘speedy lasso’ of love, concern and attentive care—the searcher after the sheep who have gone astray or have been rapaciously pillaged.”

At the conclusion of the Liturgy, Metropolitan Tikhon warmly greeted Metropolitan Hilarion and presented him with a set of miter icons of the North American saints.  He likewise presented Bishop John with a water color print of the OCA’s historic Saint Nicholas Church, Eklutna, AK, the work of Matushka Xenia Oleksa.  Metropolitan Tikhon also remarked on the Summit’s significance in bringing the persecution of Christians today to the world stage.

Metropolitan Hilarion in turn thanked Metropolitan Tikhon for the invitation to concelebrate at the cathedral and delivered greetings from His Holiness, Patriarch Kirill of Moscow.  He also noted that 2017 marks the 100th anniversary of Saint Tikhon’s election as Patriarch of Moscow, adding that the occasion is momentous for the faithful in America and Russia alike.

“Memory eternal” was sung for the late Metropolitan Leonty, and Metropolitan Tikhon shared with the faithful words spoken by Saint Tikhon at the First All-American Sobor, held in Mayfield, PA in 1907:  “Renewed in spirit, with faith and hope in God, may our Church grow and be courageous, pure, loving and strong in her unity; may she draw unto her bosom not only the Uniates, who are our brothers by blood, but advancing beyond the Russian race, may all those who live in America be drawn to the Holy Apostolic Church, so that here, there would be one flock and one Shepherd, Jesus Christ, to Whom be glory and majesty with the Father and the Holy Spirit unto ages of ages.”

Among those present at the Liturgy were Protopresbyter Daniel Hubiak, former OCA Representative to the Moscow Patriarchate, and his wife, Matushka Evelyn.  As a priest, Metropolitan Hilarion had served with Father Daniel at the OCA’s Representation Church of the Great Martyr Catherine in Moscow in the early and mid-1990s.  Metropolitan Hilarion recalled with deep fondness his memories of that period, marking the lengthy and close connection he has always had with the Orthodox Church in America.

On the preceding day, Metropolitans Tikhon and Hilarion held a working lunch meeting at which they continued discussions, initiated at the Summit, on the persecution of Christians and considered ways in which the Churches of Russia and America might draw broader attention to the plight of those suffering for their faith.

A photo gallery will be posted shortly on the OCA web site and Facebook page.