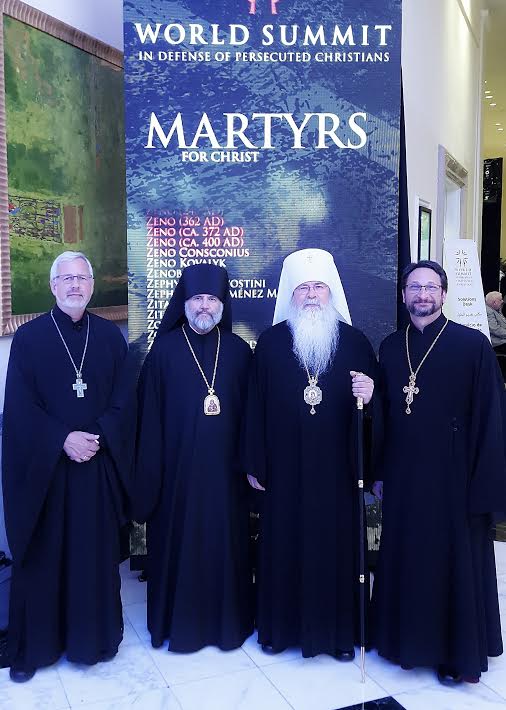 His Beatitude, Metropolitan Tikhon, offered welcoming remarks at the opening session of “Martyrs for Christ,” the World Summit in Defense of Persecuted Christians that opened here on Wednesday, May 10, 2017.

“This Summit takes place during the season of the resurrection of Christ, in which we celebrate the victory of the Life-giver over death and the destruction of corruption by the Divine Physician,” said Metropolitan Tikhon.  “As Christians, we participate in this victory and this destruction not by the external imposition of force and violence upon others, but rather through our struggle to attain the love of Christ in the Holy Spirit, which is accomplished through humility and patience.”  The complete text of Metropolitan Tikhon’s remarks may be found below.

The Summit is being sponsored by the Billy Graham Evangelistic Association [BGEA], which recently noted that, according to the US Department of State, Christians in over 60 countries face persecution from their governments or surrounding neighbors simply because of their belief in Jesus Christ.  This abuse can include beatings, physical torture, imprisonment, severe punishment, isolation, rape and even death.  These types of attacks on such a large scale are unprecedented in modern history, as reported by Franklin Graham, BGEA President and CEO and the international Christian relief and evangelism organization Samaritan’s Purse.

The gathering, which runs through Saturday, May 13, brings together representatives, many of them Orthodox Christians, from 130 countries.  Among them is His Eminence, Metropolitan Hilarion [Alfeyev] of Volokolamsk, Chairman of the Moscow Patriarchate’s Department for External Church Relations, who will deliver the keynote address, “Defying Divisions,” at Plenary Session III on Thursday, May 11.  Metropolitan Hilarion also will concelebrate the Divine Liturgy with Metropolitan Tikhon; His Grace, Bishop John of Naro-Fominsk, Administrator of the Patriarchal Parishes in the USA; and His Grace, Bishop Daniel of Santa Rosa at Saint Nicholas Cathedral, Washington, DC on Sunday, May 14.  He will deliver the homily at the Liturgy.

Accompanying Metropolitan Tikhon are Archpriests John Jillions and Eric G. Tosi, OCA Chancellor and Secretary respectively, and Archdeacon Joseph Matusiak, Secretary to the Metropolitan.  Also in attendance are His Eminence, Archbishop Demetrios of the Greek Orthodox Archdiocese of America; His Eminence, Metropolitan Joseph of the Antiochian Orthodox Christian Archdiocese of North America; and additional representatives from the Greek and Antiochian Archdioceses, the Patriarchates of Antioch and Russia, the Coptic Orthodox Church of Alexandria, the Ethiopian Orthodox Tewahedo Church, and the Syrian Orthodox Church, in addition to numerous Roman Catholic and Protestant participants.  According to BGEA, over 100 individuals who have experienced persecution for their faith also are present.

World Summit in Defense of Persecuted Christians
Welcoming Remarks by His Beatitude, Metropolitan Tikhon
Archbishop of Washington, Metropolitan of All America and Canada
May 10, 2017

During this season of the resurrection, I greet all of those who have assembled from the ends of the earth for this World Summit in Defense of Persecuted Christians and welcome you to Washington DC on behalf of the Orthodox Churches in the United States of America, a nation which has a long history of welcoming those fleeing religious persecution.

I would like to express our deep gratitude to Franklin Graham, Victor Hamm and the Billy Graham Evangelistic Association, together with Samaritan’s Purse, for bringing us together from 130 countries and a wide range of Christian Churches: Eastern and Oriental Orthodox, Roman Catholic and Protestant. We ourselves all have sometimes troubled histories of relations between us, but we have a common love for the Lord Jesus Christ that unites us in standing up for those who are being persecuted for their faith in Him.

This Summit takes place during the season of the resurrection of Christ, in which we celebrate the victory of the Life-giver over death and the destruction of corruption by the Divine Physician. As Christians, we participate in this victory and this destruction not by the external imposition of force and violence upon others, but rather through our struggle to attain the love of Christ in the Holy Spirit, which is accomplished through humility and patience.

I would also like to express my deep gratitude and reverence for those of you here who have yourselves, in humility and with patience, suffered persecution for the name of Christ. I pray that we who do not face this in our lands will have the boldness, courage and persistence to speak up when you are silenced.

And yet it is precisely your faith that encourages the rest of us.  In you we see the living reality of Saint Paul’s words to the Corinthians, “We are afflicted in every way, but not crushed; perplexed, but not driven to despair; persecuted, but not forsaken; struck down, but not destroyed” (2 Corinthians 4:8-9).

I would like to end these brief welcoming remarks by reading part of a letter written by an Orthodox Christian imprisoned in a Soviet prison camp decades ago.

“On Easter Day all of us who were imprisoned for religious convictions were united in one joy of Christ. We were all taken into one feeling, into one spiritual triumph, glorifying the one eternal God. There was no solemn Paschal service with the ringing of church bells, no possibility in our camp to gather for worship, to dress up for the festival, to prepare Easter dishes. On the contrary, there was even more work and more interference than usual. All the prisoners here for religious convictions, whatever their denomination, were surrounded by more spying, by more threats from the secret police. Yet Easter was there: great, holy, spiritual, unforgettable. It was blessed by the presence of our risen God among us — blessed by the silent Siberian stars and by our sorrows. How our hearts beat joyfully in communion with the great Resurrection! Death is conquered, fear no more, an eternal Easter is given to us! Full of this marvelous Easter, we send you from our prison camp the victorious and joyful tidings: Christ is risen!”  [In Bishop Kallistos Ware, The Orthodox Way (Revised Edition), Crestwood, NY: St Vladimir’s Seminary Press, 1995, p. 87. Letter transcribed by Archpriest George Cheremeteff (d. 1971), spiritual father of Metropolitan Kallistos Ware].