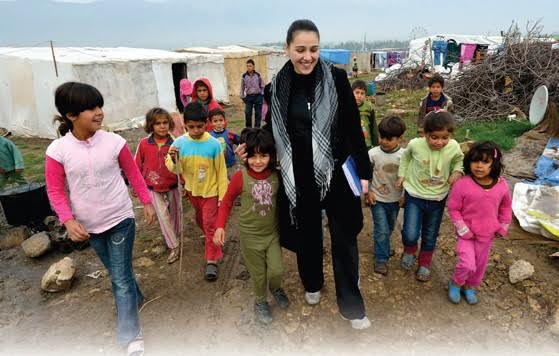 IOCC was formed in 1992 by the Standing Conference of the Canonical Orthodox Bishops in the Americas, the Assembly’s predecessor, along with lay leaders Charles R. Ajalat, Andrew A. Athens, and John G. Rangos, Sr.  IOCC is also grateful for the faithful support of honorary board members George M. Marcus and the late Dr. George J. Farha, who both played essential roles in ensuring its growth and continued service over the last 25 years.

IOCC united the efforts of Orthodox Christians in the US response to the historic upheaval caused by the dissolution of the Soviet Union and the wars in the former Yugoslavia, which displaced 2.5 million people.  Since then, IOCC has provided more than $600 million in humanitarian assistance to vulnerable people in more than 60 countries.  Current programs include humanitarian aid to internally displaced persons and refugees fleeing the civil war in Syria, relief for the people of Greece affected by the prolonged economic crisis, and, education, health and water projects in Ethiopia, Tanzania, Uganda, and elsewhere around the world.  IOCC maintains one of the largest humanitarian distribution networks in Syria, where its programs aim to provide clean water, food, medical supplies, psychosocial support and other assistance to millions of internally displaced and vulnerable Syrians and those seeking refuge in neighboring countries.

Throughout its history, IOCC has also responded to refugee crises in southern Ethiopia and Iraq, provided support and medical supplies to refugee families with disabled children in Jordan, and offered courses in English and computers to refugees in Lebanon to support job placement.  In the US, IOCC’s Frontline Team of emergency response-trained Orthodox clergy and lay volunteers stand ready to support relief efforts, having answered the call after Hurricane Katrina and countless tornadoes, floods, and other weather related disasters across the country.

In addition to its emergency and refugee response efforts, IOCC also supports long-term economic development projects.  In Greece, where an estimated one-third of the population now lives below the poverty line, IOCC provides essential food and school supplies to 5,000 struggling Greek families and works to stimulate agricultural output in the north to create sustainable employment for 2,000 farmers.  In the Western Balkans, IOCC has assisted more than 1.5 million people through refugee return and assistance, agriculture and food production, community development, education and business development programs.  IOCC’s micro-credit program in Bosnia-Herzegovina, which began in 2002, has invested $22 million into 13,000 loans for micro-businesses with an average monthly repayment rate of 99%.

Mark D. Stavropoulos, IOCC’s Chairman of the Board, leads a diverse group of philanthropists and community leaders, all of whom represent IOCC’s pan-Orthodox constituencies.  He commented on IOCC’s silver anniversary: “It has been my deep privilege to serve alongside my fellow Board members, IOCC’s dedicated staff across the globe, our exceptional partners in the Orthodox Church, and our partner organizations to help those in need.  We take care to select projects that are able to achieve the longest possible impact amongst the highest number of beneficiaries.  And though our programs are meant to provide for others, our inspiring beneficiaries provide the entire IOCC team with immeasurable love, hope, and wisdom that keeps us humble in our work.”