Seminarian Fr. Seth Earl reads the Holy Gospel while Seminarian Dn. Daniel Greeson stirs the special blend of oil and spices (photo: Dn. Evan Freeman)As Holy Week began, many clergy from our seminary community participated an ancient annual ritual: the preparation of Holy Chrism. They gathered at Saint Tikhon’s Monastery, in South Canaan, PA, with other priests and deacons, and bishops, to confect the specially blended oil used in the Rite of Chrismation in Orthodox Churches.

The Rite of Consecration of Holy Chrism began on Holy Monday morning, as His Beatitude Metropolitan Tikhon, primate of the Orthodox Church in America (OCA) and Chairman of the Board of Trustees at St. Vladimir’s Seminary, sanctified water to bless the ingredients that would be used in making the chrism. Then, some attending clergy poured the blessed exotic spices and oil into an enormous stainless-steel container and continuously stirred the ingredients as they bubbled above a hot flame, while other clergy stood nearby, reading the Gospels.

The fragrant blend of olive oil, white wine, styrax, benzoin, rose oil, basil, balsam, Venetian turpentine, and galangal; aromatic incenses extracted in oil; oils of bergamot, clove, marjoram, thyme and sandalwood; and extracts of ginger root, calamus root, nutmeg, and orris root will continue to simmer until Holy Thursday. During that entire period, in 2-hour shifts day and night, a multitude of clergy from the monastery and surrounding area will take turns continuously stirring the mixture and reading the Gospels.

When the Holy Chrism is ready, it will be poured into bottles and distributed to the 700 parishes of the OCA—from Canada to the United States to Mexico. Parish priests will use the chrism during the Rite of Chrismation to anoint a person at the pronouncement of the words, “the seal of the gift of the Holy Spirit”—a practice that some historians trace to the almost immediate post-apostolic period.

The fifth-century Patriarch, Cyril of Jerusalem details how this special oil was “symbolically applied to the forehead, and the other organs of sense” during Chrismation, and specifies that the “ears, nostrils, and breast were each to be anointed.” St. Cyril insisted that being “anointed with the holy anointing oil of God” was the sign of a Christian, a physical representation of having the gift of the Holy Spirit. He notes: “Having been counted worthy of this Holy Chrism, you are called Christians, verifying the name also by your new birth. For before you were deemed worthy of this grace, you had properly no right to this title, but were advancing on your way towards being Christians.”(On the Mysteries 3.5) 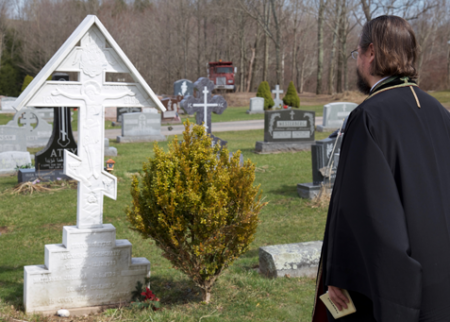 Fr. Alexander Rentel prays at the gravesite of Fr. Alexander and Mat. Juliana Schmemann (photo: Dn. Evan Freeman)Preparing chrism is also a unique privilege of autocephalous (self-ruled) Orthodox Churches, which connects them historically to their Mother Churches, since every batch of new chrism contains drops from an earlier batch of chrism. (The OCA’s Archives boasts a lead container that held chrism brought from Russia in 1900, and the Russian Church originally received its chrism from its Mother Church, Constantinople.) Every drop of chrism powerfully testifies to church unity, and to the freely given gift by God of the Holy Spirit.