Dr. Angeliki Ziaka, Associate Professor of Religion at the School of Theology of Aristotle University of Thessaloniki, Greece, will deliver the annual Archbishop Iakovos Memorial Lecture at 7pm on Thursday, April 27, in the Reading Room of the Archbishop Iakovos Library. The lecture (free and open to the public) is sponsored by Holy Cross Greek Orthodox School of Theology’s Archbishop Iakovos Chair of Theology in remembrance of His Eminence’s passionate leadership in ecumenism, interfaith relationships, and human rights. Dr. Ziaka’s lecture, “Orthodox Christians and Muslims: Interfaith Collaboration, Opportunities, and Challenges,” will draw from her active involvement in interfaith dialogue with Muslims in Eastern Europe, her research interests, and her teaching. 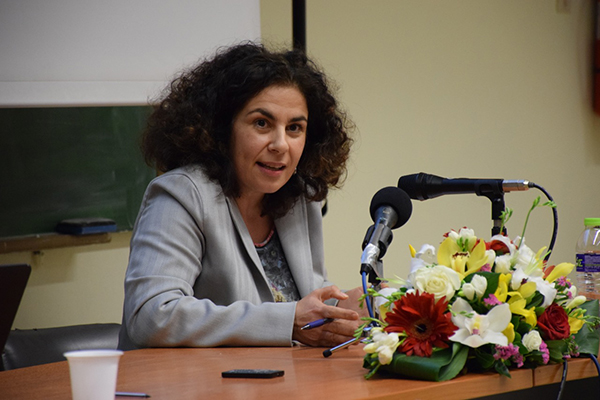 Dr. Ziaka’s teaching and research interests cover a wide chronological and thematic range with regard to Islam, including early and medieval Islamic historiography, Byzantine and post-Byzantine literature on Islam, religious historical narratives, and the rearticulating of Muslim identities through religious discourse and political realities in the Middle East, especially Shi’a and Ibadi Islam, as well as interreligious dialogue and religious education in religious and secular environments and institutions. She has published extensively in her field of research.

Dr. Ziaka is a member of several scientific associations. She coordinated the research project (2008-2009) for Aristotle University’s Research Commission entitled “The countries of the Arab Gulf and Europe. For the support of research being carried out in the Sultanate of Oman,” and was the organizer of the International Conference on Ibadism and the Sultanate of Oman (2009). Dr. Ziaka was the scientific coordinator for the Training of Teachers of Religion in Secondary Education (Christians and Muslims) for the region of Western Thrace, in Greece (June 2014-December 2015). She is currently the scientific coordinator of Islamic Studies at Aristotle University.