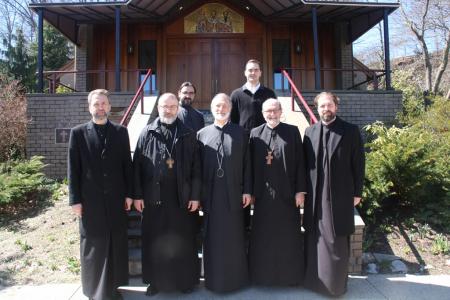 On Wednesday, March 29, 2017, a delegation of the Serbian Orthodox Church, led by His Grace the Right Reverend Irinej (Dobrijevic), bishop of the Diocese of Eastern America, met with Archpriest Dr. Chad Hatfield, president of St. Vladimir’s Seminary. They discussed potential areas of academic cooperation between St. Vladimir’s and the “Faculty of Ortodox Theology” at the University of Belgrade, including faculty and student exchanges and a collaborative international conference. Bishop Irinej is an alumnus (M.Div. ’82) of St. Vladimir’s Seminary and member-designate to its Board of Trustees.

Representing the school of advanced theological studies in Belgrade was Protopresbyter-Stavrophor Dr. Vladimir Vukadinovic, full professor of Liturgics and Ecclesiastical Art History. Father Vladimir had been in the U.S. serving as guest lecturer for the Diocese of Eastern American during its Fraternal Seminar and Clergy Confessions gathering, held in Cleveland, Ohio, March 23–25.

Also among the delegation were: Protopresbyter-Stavrophor Dr. Zivojin Jakovljevic, episcopal deputy of the Diocese of Eastern America, dean of St. 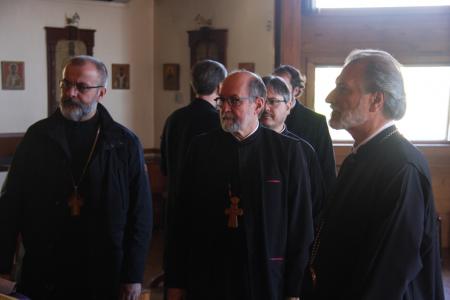 During their time on campus, the delegation also toured the “Father Georges Florovsky Library,” the largest repository of Eastern Christian literature in the U.S. besides the Library of Congress, Three Hierarchs Chapel, and SVS Bookstore. Additionally, His Grace and Fr. Vladimir met with Deacon Gregory Hatrak, Director of Marketing and Operations manager of SVS Press and Bookstore, to discuss another cooperative venture: the translation and publication of theological works. 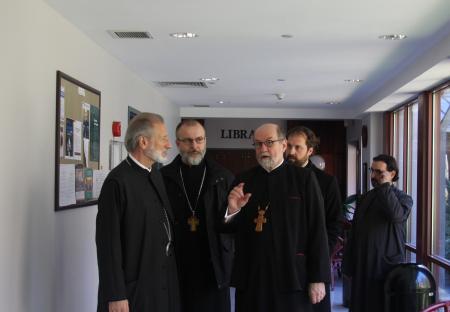 Another highlight of the visit was a meeting between Fr. Vladimir and the seminarians of Serbian background at St. Vladimir’s: Dn. Larry Soper and Stefan Djoric of the Eastern American Diocese, Joseph Wessler of the Western American Diocese, and Stefan Mastilovic of the Australian and New Zealand Metropolitanate. The students and Fr. Vladimir took a unique opportunity to discuss contemporary issues concerning Orthodox Christian theological education.