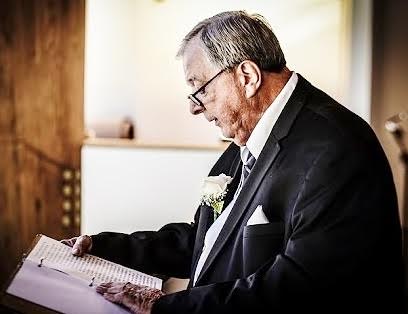 During their Spring Session March 28-31, 2017, the members of the Holy Synod of Bishops awarded the Order of Saint Romanos to John Sutko in recognition of his extraordinary contributions to the field of liturgical music in the Orthodox Church in America.  It is expected that Mr. Sutko, who had served for six decades as choir director at Saints Peter and Saint Paul Church, Burr Ridge, IL, will receive the award in May.

Mr. Sutko began singing in the Saint Peter and Saint Paul Choir at the age of 14.  He also was a member of the Lindblom High School A Capella Choir, for which he had been selected student conductor during his senior year.  He pursued undergraduate studies at Wilson Junior College, where he majored in business and minored in music.  Two particular individuals inspired him to further develop his musical talent.  The late Archpriest Nicholas Semkoff invited him to direct the second Sunday morning Liturgy at Saint Peter and Saint Paul Church, at that time located on Chicago’s South Side, which was celebrated in Church Slavonic.  He also encouraged Mr. Sutko to concentrate on Church music in addition to his other college studies.  The second person to influence him was Prof. Lela Hamner, an instructor at the Conservatory of Music and Wilson Junior College, who encouraged him to change his major to music and voice.

While directing his parish’s choir, Mr. Sutko began studies at the Chicago Conservatory of Music while pursuing courses in education at Chicago Teacher College.  In addition to courses in harmony, conducting, applied music, music history and composition, and related subjects, he was involved in oratorio, opera workshop, voice recitals, and solo work at various churches and other Chicago-area venues.  At the age of 20, he began directing both Sunday morning Liturgies at Saint Peter and Saint Paul Church.

In 1957, Mr. Sutko received his Bachelor’s Degree in Music Education and began his career teaching music at McClure Junior High School, Western Springs, IL—a position he held for 35 years.  In 1961, he received his Master’s Degree in Music Education.  Seven years later, he became McClure’s Assistant Principal and began began work on his second Master’s degree in school administration.  On two occasions he had been nominated for the Golden Apple Award in teaching in the state of Illinois.

In the late 1960s and early 1970s, the official English texts for all the feast day services were being prepared by the OCA’s Liturgical Commission.  Mr. Sutko began adapting the festal Vesper propers in four parts and in their proper tones.  Concurrently, as area high schools and colleges introduced Russian language courses into their curricula, he was called upon by several language departments to offer performances of Orthodox sacred and secular compositions for special events.  In the 1980s and 1990s, he continued to offer similar presentations to other religious and secular groups and organizations.  Among them were the services marking the episcopal consecration of His Grace, Bishop Boris; Chicago-area services commemorating the Millennium of Orthodoxy in Russia in 1988; the installation of His Grace, Bishop Job; three patriarchal visits in the 1990s; numerous benefit concerts; a Knights Templar benefit for Moscow’s Christ the Savior Cathedral; and the wedding of Prince Arnold and Princess Renate of Windisch Graetz, Germany, to name a few.  In 1999, he began transcribing handwritten scores into computer format.  The fruits of his labor produced a Panikhida service book, a book of Eastern European Christmas carols, and a collection of traditional Carpatho-Rusyn Prostopinije/Uhorskij chants.

A well known basso profundo, Mr. Sutko also has accepted invitations to participate in various professional choirs as the lead soloist, chanter, and octavist.  These include performances with the Bach Society of Saint Louis, MO in its presentation of Rachmaninov’s Divine Liturgy and similar performances with the Northwestern University and University of Chicago choirs that featured works by noted Russian composers.

In the new millennium, Mr. Sutko continued to teach different adaptations and arrangements of contemporary composers to the Saint Peter and Saint Paul parish choir while maintaining the heritage and musical legacy that had been handed down to him.  In recognition of his years of ministry, he was honored on his 60th anniversary as parish director in 2013 and was awarded a Synodal Grammota.  In February 2016, he conducted his final Divine Liturgy as choir director at Saint Peter and Saint Paul Church.  In retirement, he continues to devote his time to directing and singing with local choirs and in supporting the greater Chicago area’s Orthodox Christian community.

Mr. Sutko and his wife Alice reside in Burbank, IL.