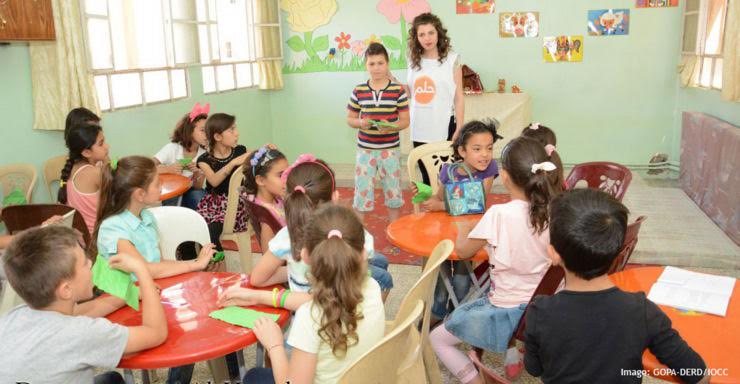 After six years of conflict, International Orthodox Christian Charities [IOCC] is urging continued support for programs to meet the needs of Syrian children and adolescents who face food insecurity, lack access to education, and bear deep psychological scars.  Children displaced by the conflict in Syria, as well as those who are now refugees outside of the country, require support to address all aspects of their health and wellbeing.

The situation of more than 5.6 million children inside Syria, where IOCC has maintained an active presence since 2012 in partnership with the Greek Orthodox Patriarchate of Antioch’s Department of Ecumenical Relations and Development (GOPA-DERD), remains the most desperate.

“The real danger for Syrian children and their families,” explained Mark Ohanian, IOCC Senior Director of Middle East Programs, “is not just the immediate need for humanitarian aid to sustain them physically, but the long-term effects on their wellbeing caused by the trauma they have experienced and disruptions to their lives.”

Majida, a 26-year-old refugee from Homs living in Lebanon’s Bekaa Valley, was unable to breastfeed her infant son Nader because of renal disease.  He is just one of more than 1,000 Syrian refugee children in the Bekaa Valley who have been screened by IOCC staff.  Ten percent of the children screened were found to be at-risk of malnutrition, either because of underlying medical conditions or lack of support for nursing mothers.  In addition to providing breastfeeding assistance, children found to be at-risk are provided with protein-rich, high-calorie supplements to promote their healthy development.

Through screening and simple interventions, the prognosis for Nader has improved and his wellbeing has also benefitted his family.  “A mother’s milk is the best nutrition for the baby as it provides immunity, while the bottle might catch germs and cause the baby to get ill.  Nader is in better health with breastfeeding, and we are able to cut down our expenses and spend on other priorities in the difficult conditions we are living in,” Majida said.

Even for otherwise healthy Syrian children, the war is taking its toll. Three million Syrian children born since the beginning of the conflict have experienced prolonged fear from bombings and violence, the loss of family members and friends, and anxiety caused by repeated dislocation and uncertainty.

In an effort to address the trauma on Syrian children, IOCC and its partners began establishing Dream Centers to provide child-friendly environments for Syrian children who are homeless, orphaned, displaced and those with disabilities.  Four centers, including one serving Aleppo, in Syria have been established to date to provide psychosocial support, offer instruction in personal care and hygiene, problem-solving and non-violent communication, as well as how to express their feelings and respond and adapt to challenging social situations.  Participating children and their parents learn through theater, sports, games, art and other interactive sessions that take place over the course of three months.  The program is supervised by a psychiatrist who follows up with the children requiring additional support.

School-aged children also face increasing obstacles to receiving an education.  The UN estimates that one in four Syrian schools have been damaged, destroyed, or occupied and more than half of Syrian children are out of school.  In Lebanon, which hosts more Syrian refugees than any other country, eight out of every ten Syrian refugee children are not enrolled in school.

In Syria, Jordan, Lebanon and Greece, IOCC is providing remedial classes in English, math, and other subjects to keep children engaged and minimize gaps in learning so that they are able to return to formal education.  School uniforms, required in many countries, are also being provided to children.  Inside Syria, IOCC has employed Syrian women displaced by the conflict to make school uniforms.  The cash-for-work program provides children with the uniforms required for school and much-needed income for the women and their families who are often dependent on aid to survive.  In rural Damascus and elsewhere in Syria, children and their teachers show remarkable resilience.  During cold winter months, many children went to school wrapped in coats and scarves without electricity or heat so that they would not fall behind.

Read more about IOCC’s efforts in Syria and beyond on-line.