IN THE NEWS:&nbsp; From coast to coast!

IN THE NEWS:&nbsp; From coast to coast!

Following the celebration of a Presanctified Liturgy during Great Lent 2016, Priest John Nightingale—then Acting Rector of Saint Basil Church, Simpson, PA—experienced a tragic accidental fall.  While he regained sensation in his arms and legs, he was unable to walk and had minimal use of his arms and hands and, according to His Eminence, Archbishop Mark of Philadelphia and Eastern Pennsylvania, he is considered a quadriplegic.

“Father John was not feeling well and went out to the porch for fresh air,” Archbishop Mark related in a January 2017 letter to the clergy and faithful of his diocese, in which he appealed for financial assistance for Father John and his wife, Matushka Kyra.  “At some point he passed out and fell over the railing, injuring his neck, vertebrae and spinal cord.  He has been in the hospital since that time.

“After months of therapy, Father John is now able to feed himself, but is still unable to walk,” Archbishop Mark added.  “Due to the lack of strength in his arms and legs, he is unable to transfer himself from his bed to a wheel chair, necessitating nursing assistance and the installation of a lift in his home.”

Father John’s devoted wife, Matushka Kyra, has driven back and forth to the VA Hospital in Bronx, NY during the past year, in addition to caring for her elderly parents.

With the Nightingales’ medical and related expenses mounting, Archbishop Mark called upon the faithful to offer financial assistance to Father John and Matushka Kyra, in part to construct a doorway and ramp into their home, to make a first-floor rest room handicapped accessible, and to purchase a van with a lift.

“A Vietnam veteran, Father John lived in California and later Alaska, where he worked as a hospice chaplain for a number of years before enrolling in Saint Tikhon’s Seminary,” Archbishop Mark added.  “After his ordination to the priesthood, he served regularly as a supply priest, turning over his stipends to the diocese without keeping a penny for his time and travel.  While in the Bronx VA Hospital, he has provided pastoral care to other patients—while being a patient himself.

“Since the January appeal letter went out, we have received $33,778.00, for which the Nightingales are most grateful,” added Archbishop Mark.  “From these donations, $25,855.05 went to pay off the remaining balance on a van and $750.00 related to the rest room upgrade.”

The Nightingales still need to install a lift to transfer Father John back and forth from his bed and wheel chair—an expense of some $6,000.00.  The VA will pay for three days of nursing care per week, but all other days will be paid “out of pocket.”

Father John is slated to be discharged from the Bronx VA in the coming weeks.

Donations to assist the Nightingales, especially during this season of Great Lent, are being accepted with gratitude by the Diocese of Eastern Pennsylvania and may be sent directly to the Diocesan Office, 144 Saint Tikhon’s Road, Waymart, PA 18472, earmarked “Father John Nightingale.”  All donations will be acknowledged by the Diocese. 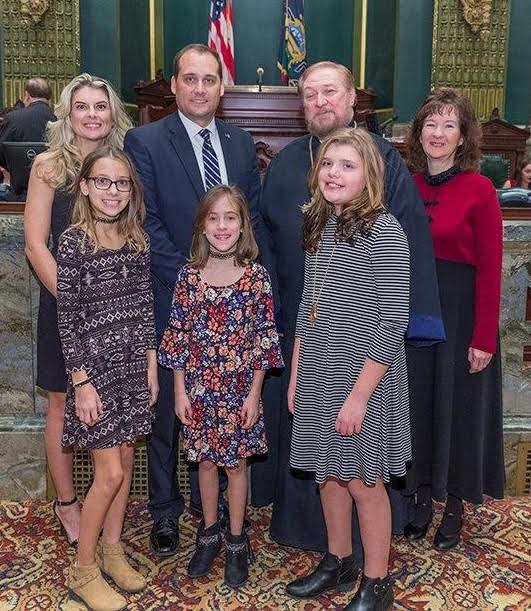 The Johnsons with the Langerholcs.

Father George called upon God to help members of the Senate to “open their minds, their hearts, and their lips, so that they may come to understand Thy most Holy will; bless their lives with Thy goodness, and direct their lives in the path of Thy goodness.”  He asked God to give the state senators the wisdom of Solomon, the desire to protect like the guardian angels, and the ability to care like the Good Samaritan.

An agency of the Assembly of Canonical Orthodox Bishops of the USA, OCF’s mission is to transform the lives of college students in the US and Canada by guiding them along the path to Jesus Christ through His Church while cultivating a campus community of worship, witness, service, fellowship and education.  Headquartered on the campus of Hellenic College/Holy Cross Greek Orthodox School of Theology, Brookline, MA, OCF maintains a network of over 400 chapters.

OCF is seeking a motivated individual who can champion Orthodox campus ministry and oversee its regional and national programs.  The candidate must demonstrate strong leadership ability, management skills, the ability to multitask, and an understanding of and respect for the practices, traditions, theology and structure of the Orthodox Church.

A detailed job description and application details are available on-line.  Deadline for submitting applications is May 1, 2017.  Applicants will be reviewed and contacted based on the order of submitted applications with the hope that the position will be filled by the target date of June 2017.

The Orthodox Christian Association of Medicine, Psychology, and Religion [OCAMPR] recently announced that the keynote speaker for its 2017 Conference will be His Eminence, Metropolitan Isaiah of the Greek Orthodox Metropolis of Denver.

Slated to be held at the Ukrainian Orthodox Church Cultural Center, Somerset, NJ November 2-4, 2017, the conference will have as its theme “Resiliency: Body, Mind and Spirit.”  Among the other plenary speakers are Deacon Euthym Kontaxis, M.D., Medical Perspective; Demetra Jaquet, D.Min., Psychological Perspective; and Archpriest John Behr, D.Phil., Theological Perspective.

OCAMPR also welcomes paper and workshop presentations related to the conference theme and/or other topics related to the interface of Orthodox healing traditions with contemporary theories and practices of care.  Proposals, which should be sent to .(JavaScript must be enabled to view this email address) no later than May 1, should include the title of the paper or workshop, a one-paragraph abstract, and the presenter’s credentials.  Additional information is available on OCAMPR’s web site in advance of the conference.

A retreat for Orthodox Christian adult singles of all ages will be sponsored by the University of Saint Katherine, San Marcos, CA, May 26-29, 2017.  In addition to worship and inspirational presentations, the weekend will offer ample fellowship activities—including a visit to the San Diego Zoo—and a service project.  Priest George Morelli will be the main speaker.

The deadline for registration is April 25.  The $300.00 registration fee includes housing, meals, zoo admission and lunch, and all retreat events and resources.  To register please contact Donna Marie Fletcher, Event Administrator, at .(JavaScript must be enabled to view this email address). 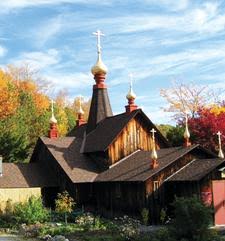 “Finding Peace in Troubled Times: Moving from Fear to Inner Transformation” will be the theme of the annual Lenten retreat at New Skete, Cambridge, NY Saturday, March 18, 2017.

The retreat theme will be developed in three presentations throughout the day.  In the morning, Sister Rebecca will offer a reflection titled “Experiencing and Befriending our Shadow: Emotions of Anger, Shame and Fear,” in which she will outline how looking inward with compassion allows our emotions to become pointers and paths to transformation and how these energies may provide an opening to a silent deep space to unconditional experience of God’s love.  In the afternoon, Brother Stavros will speak on forgiveness and Brother Christopher will offer a presentation titled “The Peace That Passes Understanding: The Anchor of Lectio Divina.”  The retreat will conclude with the celebration of Great Vespers and a Healing Service.