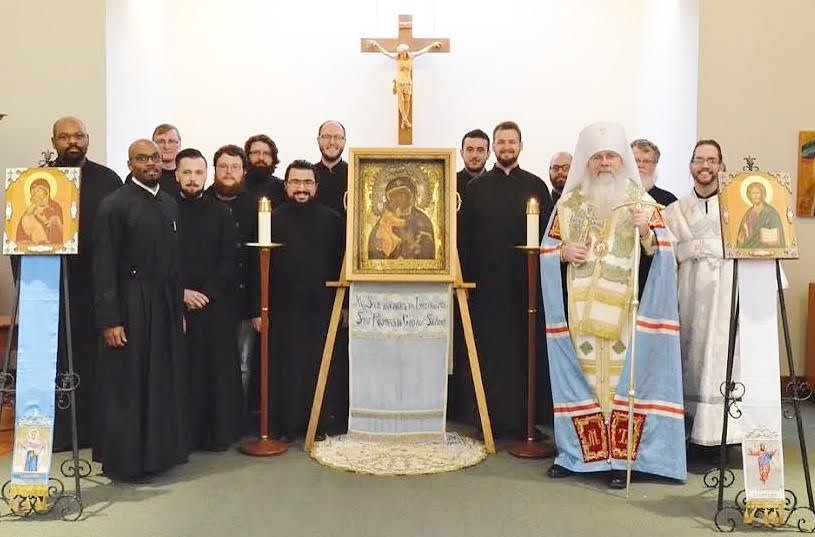 His Beatitude, Metropolitan Tikhon celebrated an opening Memorial Service for the victims of the Russian Revolutions of 1917 and their aftermath at Villanova University’s Corr Hall Chapel in conjunction with the opening of an exhibit titled “Blood and Soul” on Wednesday, February 8, 2017.  The major exhibit, which runs at the University’s Falvey Memorial Library through September 1, highlights the 100th Anniversary of the enthronement of Saint Tikhon, the former Archbishop of North America, as Patriarch of Moscow in 1917, as well as the Revolutions that occurred the same year.  See related story.

At the conclusion of the Memorial, Metropolitan Tikhon delivered the following reflection on Saint Patriarch Tikhon and the important role he played in the life of the Church in America as well as his homeland.  A photo gallery of the service and exhibit opening also is available on the OCA web site and Facebook page.

Remarks on Saint Tikhon of Moscow
Blood and Soul: The 1917 Revolutions of Russia
Villanova University
February 8, 2017

I would like to express my thanks to the University of Villanova for the invitation to participate in the opening ceremonies of this exhibition—Blood and Soul: The 1917 Revolutions of Russia.  This is not the first time that this fine institution has taken the initiative to address topics of such historical significance, especially those relating to the Christian Churches sojourning in those historical contexts.

In particular, we are grateful to all those associated with the Falvey Memorial Library and the Russian Area Studies Program for their efforts in co-sponsoring this exhibit and a special thanks to Archpriest John Perich, who is curating a large portion of this exhibit and has provided many relevant archival and historical items from his own collection and from the Metropolitan Museum which is located at Saint Tikhon’s Monastery in South Canaan, Pennsylvania.

This exhibit is taking place in this year when we celebrate the 100th Anniversary of the enthronement of Saint Tikhon, the first Patriarch of the restored Patriarchate of Moscow and All Russia, which had been abolished for two hundred years, since the time of Peter the Great. Even in the midst of the turmoil of the 1917 revolutions, and perhaps precisely because of the confusion that reigned in Russia at the time, the Orthodox Church saw fit to restore this ancient position of Patriarch, and by God’s providence, Saint Tikhon was elected to fill it.

While these may have been components of his apostolic work here in North America, it may be suggested that the vision of Saint Tikhon was, in fact, an extension of the words of our Lord Jesus Christ as expressed in the Gospel of Saint John, where our Lord Jesus Christ says, “I am the good shepherd; and I know My sheep, and am known by My own.”

When he arrived in North America, Saint Tikhon offered his first sermon at the Holy Trinity Cathedral in San Francisco on December 23, 1898. In that sermon he recalled the words of the prophet Hosea in reference to the calling of the gentiles and says, “By the will of God, I, too, in my unworthiness, was called to apostolic service here, and so now I too will say to those called ‘not my people,’ ‘You are my people;’ I will call ‘beloved’ the one called ‘not my loved one.’  Until now, we had been strangers to each other, and did not know each other. Henceforth, the Lord Himself is placing us into a bond of closeness, into a mutual relationship of bishop with his flock and flock with her bishop.”

He goes on to speak of the relationship between a bishop and his flock as that of Bridegroom and Bride: “Understanding in this way my relationship to those I am to shepherd, and being betrothed to the Aleutian flock, I have left my beloved country, my elderly mother, my kinsfolk and acquaintances dear to my heart, and traveled to a far-away country, to a people unknown to me, in order that henceforth you may become my people and my beloved.”

Though pronounced a decade before the Russian Revolution, these words could have come from his lips during those most difficult times in 1917 and in the years of persecution and unrest which were to follow. Even in the midst of the chaos in Russia, he remained above a Pastor to his flock, revealing the practical application of the Lord’s words:  “I am the good shepherd. The good shepherd gives His life for the sheep.”

Saint Tikhon was no hireling, but indeed a true shepherd who gave his life for his sheep in North America, just as he did during those times of terrible persecution and temptation. He remained steadfast in watching over his sheep and keeping them safe within the ark of the Church on whatever continent they found themselves and in whatever circumstances.

Once again, I share his words, offered in America for the feast of the Triumph of Orthodoxy, but prophetically applicable to his later martyic witness in Russia: “Even as towering waves, once they have crashed against the ship, yet again blend in with the sea, and one can neither see them nor distinguish them from other waves, so also the enemies of Christ, once having risen up against God’s Church, again return to the void from whence they sprang up while the ship of the Church continues, as before, on its victorious voyage.”

In order to help in overcoming the division and brokenness of the world, he heeded the words of the Lord: “And other sheep I have which are not of this fold; them also I must bring, and they will hear My voice; and there will be one flock and one shepherd.”

Saint Tikhon was a true missionary and laborer with Christ in this mission of bringing the lost sheep into the fold. But he labored in a truly humble and deeply Christian manner.  In the Akathist Hymn composed in his honor, he is called an “example of meekness in authority.” And it is with this Christ-like spirit of meekness that he led the Church in Russia, just as he accomplished his missionary work. In another place he would say, “most importantly, the Orthodox Church accomplishes her [missionary] task in silence, with humility and godliness, with an understanding of human frailty and divine power.”

The great example of Saint Tikhon is an example and an inspiration for all of us who strive to fulfill the commandments of Christ in the community we have been planted or that to which we have been, or will be sent. It is truly a testament to his great Christian witness that St Tikhon, as he faced false allegations and imprisonment at the end of his life, was yet able to cry out, “Let my name die in history that the Church may live!”

Indeed, he fell asleep in the Lord in the midst of great darkness, a long and dark night of darkness. But we are here today to celebrate his name, which, in fact, did not die in history, but remains with us, not only as a name but as a witness to the power of Christ and the glory of the resurrection, as an inspiration to us all, whether we live in Russia or America, and a glorious saint who unites us with one another and with the hosts of heavenly powers and all the saints who are gathered in love around our Great and Good and Divine Shepherd, our Lord and Savior Jesus Christ, to Whom, together with His Father and the Holy Spirit, are due all glory, honor and worship, both now and ever and unto ages of ages. Amen