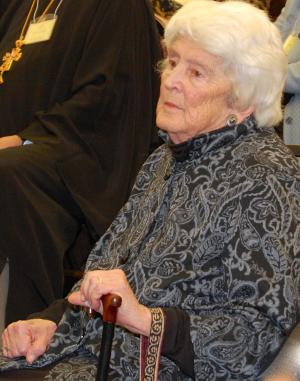 Matushka Juliana was born to a family of White Russian émigrés and was raised and educated in France. In 1951 she and her husband, Protopresbyter Alexander Schmemann, moved to New York, where Matushka Juliana began a long teaching career at the Chapin School, the Spence School, and the Brearley School.

In 1977 she was appointed headmistress of Spence, on East 91st Street. A serious illness compelled her to resign in 1981, but once recovered, she joined the faculty of Brearley, where she remained until her retirement. Matushka Juliana is warmly remembered by many generations of women to whom she taught French and Russian, and to whom she was always “Madame Schmemann.” The French government awarded Matushka Juliana the Palme d’Argent medal for service to French culture.

Matushka Juliana was born on October 6, 1923, in Baden-Baden, Germany, where her family, the Ossorguines, found themselves after the Russian revolution. Her son, Serge Schmemann, a member of The New York Times editorial board and for many years a Times foreign correspondent, wrote a book, Echoes of a Native Land, tracing 200 years of Russian history through the former estate of the Ossorguines south of Moscow.

Matushka Juliana’s family soon moved to Paris, where she attended the College Sainte Marie de Neuilly outside Paris and the University of Paris-Sorbonne, where she earned a licence ès lettres degree in classics. In 1943 she married Alexander Schmemann, a priest and widely acclaimed theologian who became dean of St. Vladimir’s Orthodox Theological Seminary and who played an instrumental role in founding the Orthodox Church in America. Father Schmemann died in 1983.

In retirement, Matushka Juliana was active in church affairs and wrote two books, My Journey with Father Alexander and The Joy to Serve, which discussed the challenges of being an Orthodox Christian in the modern world. She travelled all over the country lecturing to women’s groups.

In lieu of flowers, the family requests that donations in Matushka Juliana’s memory be made to the Justin Solak Foundation at www.iamaffected.org.  Justin was a beloved great-grandson who died one year ago.