His Beatitude, Metropolitan Tikhon was among the 30 guests who attended a reception and lunch hosted by His Eminence, Metropolitan Joseph of the Antiochian Orthodox Christian Archdiocese of North America in honor of His Eminence, Timothy Cardinal Dolan, Roman Catholic Archbishop of New York, on Monday, January 23, 2017.

Accompanying Metropolitan Tikhon to the gathering, which was held at the Antiochian Archdiocese’s headquarters, Englewood, NJ were Protopresbyter Leonid Kishkovsky, OCA Director of External Affairs and Interchurch Relations, and Archdeacon Joseph Matusiak. 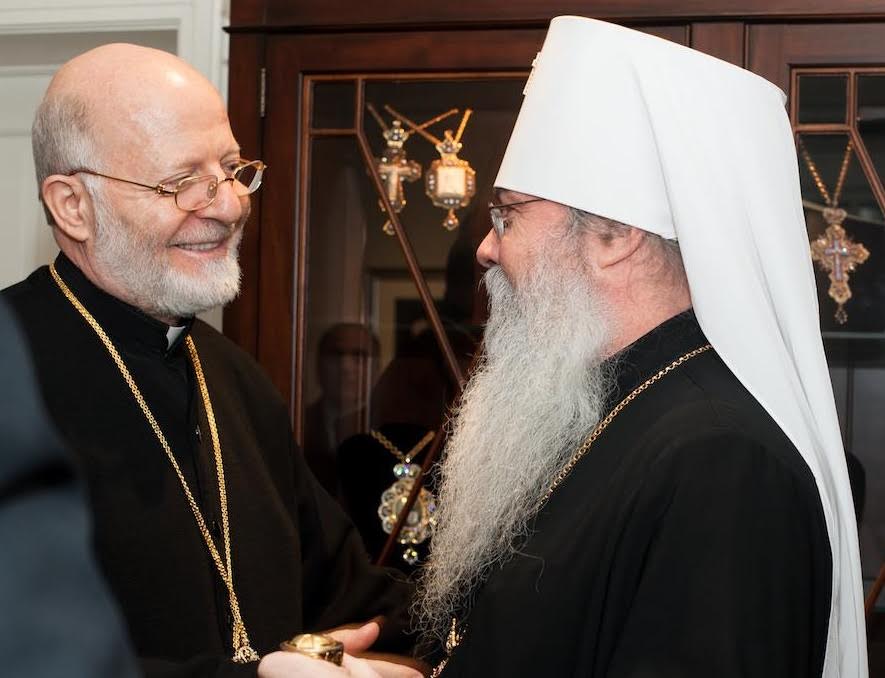 “During the reception and the lunch, a beautiful dialogue took place on ways those present can cooperate to address both the moral issues confronting our country as well as the plight of Christians in the Middle East,” reads a press release posted on the Antiochian Archdiocese’s web site.  “In his speech, Metropolitan Joseph offered a warm welcome to Cardinal Dolan, thanking him for his work and concern for the suffering people of the Middle East, especially those who’ve endured the ongoing war in Syria.  He challenged all present to work as a united body before the government, witnessing to the world of our care and deep concern for peace in the region, so that our voices do not go unheard.”

Metropolitan Tikhon was among those who also addressed Cardinal Dolan after expressing gratitude to Metropolitan Joseph for his hospitality. 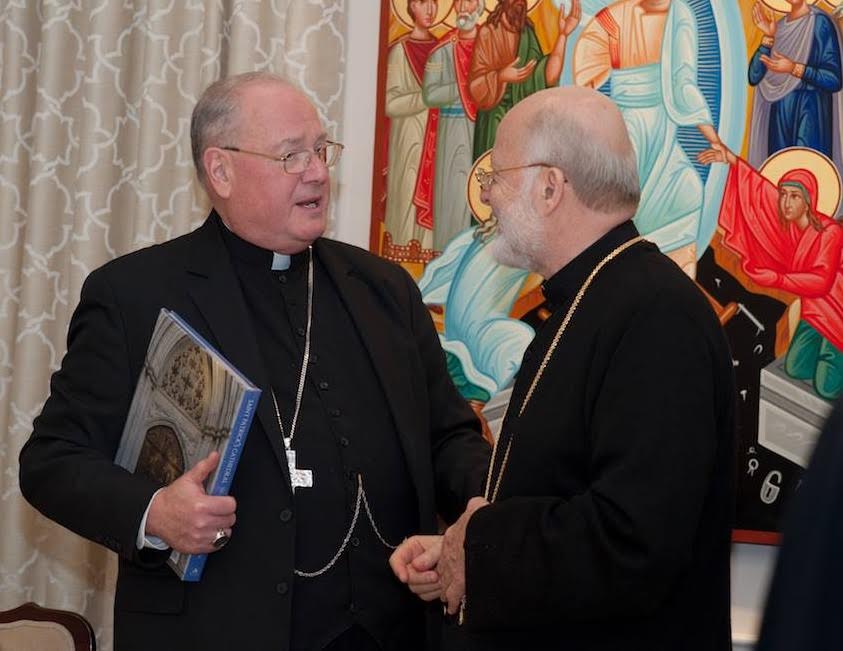 “We are grateful for the hospitality of His Eminence, Metropolitan Joseph, who is hosting us so warmly and with such Christian love at the headquarters of the Antiochian Orthodox Christian Archdiocese,” Metropolitan Tikhon said.  “It is my joy to be present with you and, together with our Director of External Relations, Father Leonid Kishkovsky, to bring the greetings of the Holy Synod, the clergy and the faithful of the Orthodox Church in America to all of you, but most especially to our guest of honor today, His Eminence, Cardinal Timothy Dolan.

“Your Eminence, your patron saint, the Holy Apostle Timothy, was commemorated yesterday on the Eastern Orthodox calendar and will be commemorated later this week on the Roman Catholic liturgical calendar,” Metropolitan Tikhon continued.  “It is always good to remember our common veneration of many ancient saints, particularly during this week of Christian Unity, when we join together to offer testimony to the world of the love and glory of our Lord, Jesus Christ, which is reflected in the lives of the saints.” 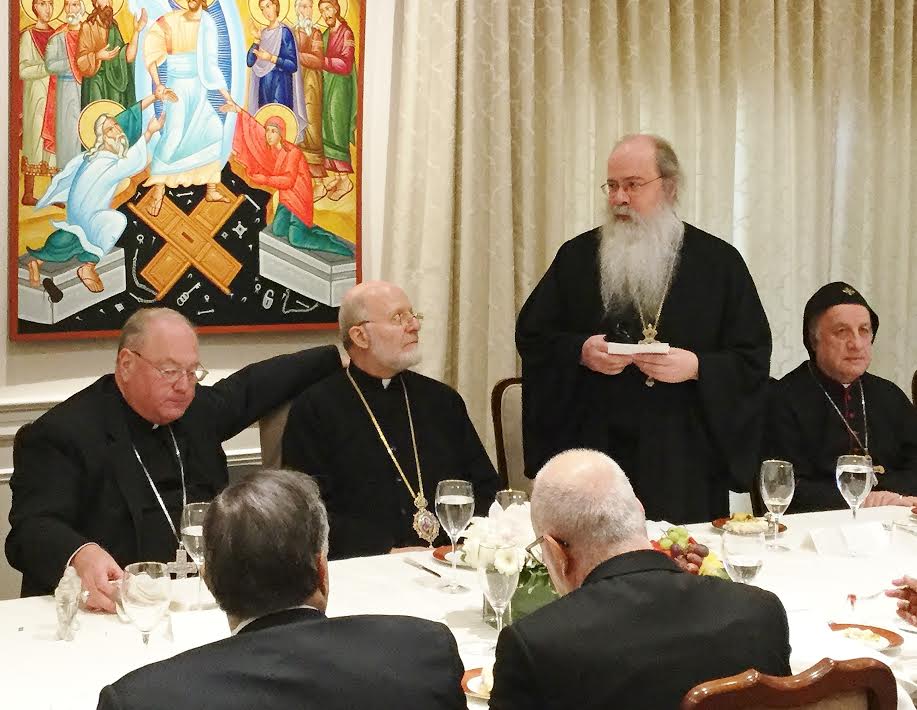 Turning his attention to “these times of war and terrorism in the Middle East and in many other places throughout the world, in this time of growing division and uncertainty in our own lands,” Metropolitan Tikhon went on to say that “it is important that we focus on the healing power of the Divine Physician, and we are grateful that it is precisely this message that Your Eminence has consistently offered through your leadership, your preaching and your very person.  Whether solemnly or on your blog, your voice always resonates as a voice of peace and of joy, even as you stand firmly on the rock of Christ’s truth.  We offer our heartfelt prayers for you today, so that, whether you are serving as President of the US Conference of Catholic Bishops, as you have in the past; sharing a meal with your brothers in Christ, as you are today; or leading thousands of young people on the March for Life, as you will do later this week, you will know that you have the support and encouragement of the Orthodox Church in America.

“We ask that God grant you many years of continued health, so that you can continue to ‘be strong in the grace that is in Christ Jesus’ and, like Saint Timothy hearing many things from Saint Paul among many witnesses, you will commit these same things to faithful individuals who will be able to teach others also and thereby continue ‘as a good soldier of Jesus Christ’” [2 Timothy 2:1-3], Metropolitan Tikhon concluded. 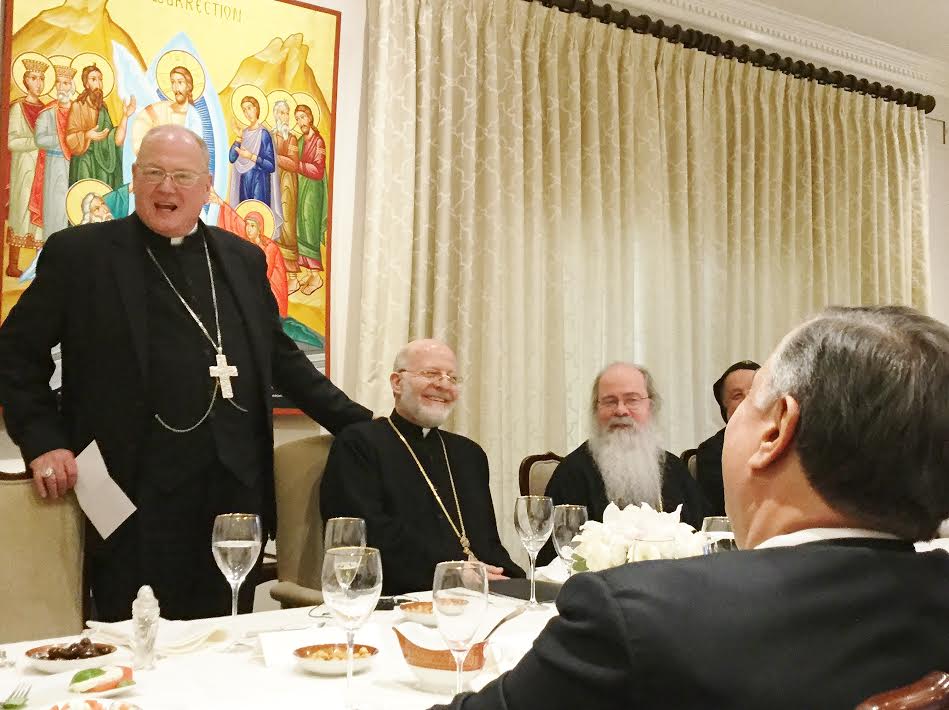