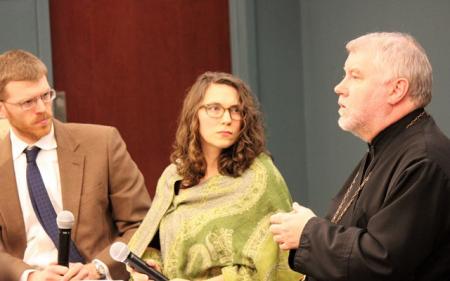 Music faculty Harrison Russin and Robin Freeman engaging famed composer and musician Fr. Ivan Moody in a public conversation about the past, present, and future of Orthodox Christian music. (photo: Mary Honoré)On the evening of January 20, 2017, priest and famed composer Fr. Ivan Moody shared his thoughts on the past, present, and future of Orthodox music, during a public conversation with faculty from St. Vladimir’s Seminary: Robin Freeman, director of Music, and Harrison Russin, lecturer in Liturgical Music.

Father Ivan currently is a researcher at CESEM-Universidade Nova de Lisboa, and also is Chairman of the International Society for Orthodox Church Music (ISOCM). ISOCM has recently released a book by Fr. Ivan, titled Modernism and Orthodox Spirituality in Contemporary Music

During the evening Fr. Ivan spoke with impressive facility on a range of subjects. He touched upon everything from deciphering early musical notation written on papyri to creating fresh repertoire in sacred music, and from the “monophony and polyphony wars” in church history to the therapeutic function of music in contemporary church and society.

A podcast of the event is available here as part of the “Voices from St. Vladimir’s” series on Ancient Faith Ministries.