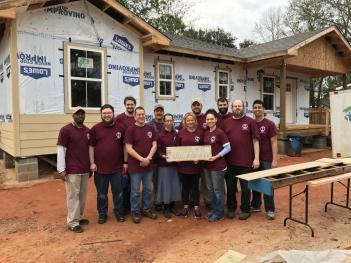 Seminarians Antwian Davis and Evan LeDoux (far left and second from left), and Dn. Andrew Honoré (far right), with the rest of the crew at the IOCC and Habitat for Humanity build in New OrleansOver Winter Break 2017 three SVOTS Seminarians participated in an IOCC Action Team that helped rebuild homes in New Orleans, an area devastated by Hurricane Katrina in 2005: Dn. Andrew Honoré, Evan LeDoux, and Antwian (Anthony) Davis. Seminarian Davis shares his experience ministering—and being ministered to!—during his one week adventure in Louisiana.

My trip to Louisiana was amazing—so amazing that my experience is almost hard to put into words. To begin, the people from IOCC who put the trip together were great: they took care of us from the moment we signed up to the time we got on the plane to go back to the Seminary.

And, one thing we never had to worry about was food. As soon as we landed, the IOCC Team took us out to eat, and from there on, we never stopped eating the great cuisine of Louisiana!

For me though, the best part of the experience was getting to spend time with all the people on the trip—students from the other seminaries, and even other seminarians from St. Vlad’s. I know that might sound a little strange, but because of our busy class schedules while the Seminary is in session, we just do not have the opportunity to see each other or to spend time around each other as much as we’d like. This was a chance to get to know each other personally, outside of the daily routine of classes and schoolwork. 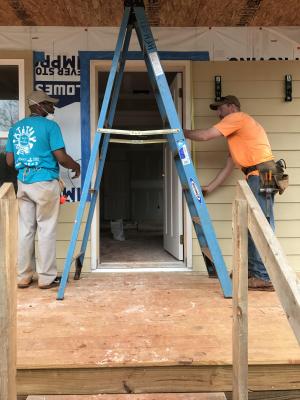 Our days on the IOCC Action Team were composed of daily prayer in the morning and breakfast, followed by the trip to our job site, where we were tasked with completing a house build for the organization “Habitat for Humanity.” We did various different things, depending on the need, from putting up siding to painting. We ate our lunches—which we had made each morning after breakfast—on the job site. 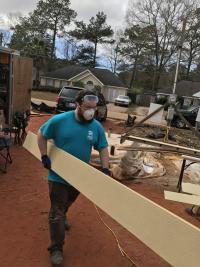 After the workday, we went back to the Lutheran church where our daily meals were prepared, and cleaned up for dinner. After dinner we enjoyed a little down time before vespers, and after vespers each of us gave a reflection about our day—which offered us a time to get to understand each other personally and spiritually. We even spent a couple of nights hanging around an outside fire pit, having refreshments and, again, getting to know each other a little better.

One day we visited the Lower Ninth Ward in New Orleans, to see where most of the flooding took place during Hurricane Katrina. That eye-opening experience alone was worth going on the trip; I saw where the devastation had occurred and how the city is still rebuilding ten years later.

The work I did for Habitat for Humanity was rewarding and life changing—an opportunity to step outside of myself and my daily routine, to do something for someone else and help them start life in a new home. (Personal note: don’t shy away from a trip like this if you lack building experience, because the onsite supervisors are there to help and make sure safety always comes first.)

I would recommend this IOCC Seminary Build to anyone who would like to have a wonderful experience working with good people from several seminaries, IOCC, and Habitat of Humanity—not to mention the unforgettable experience of Southern hospitality!