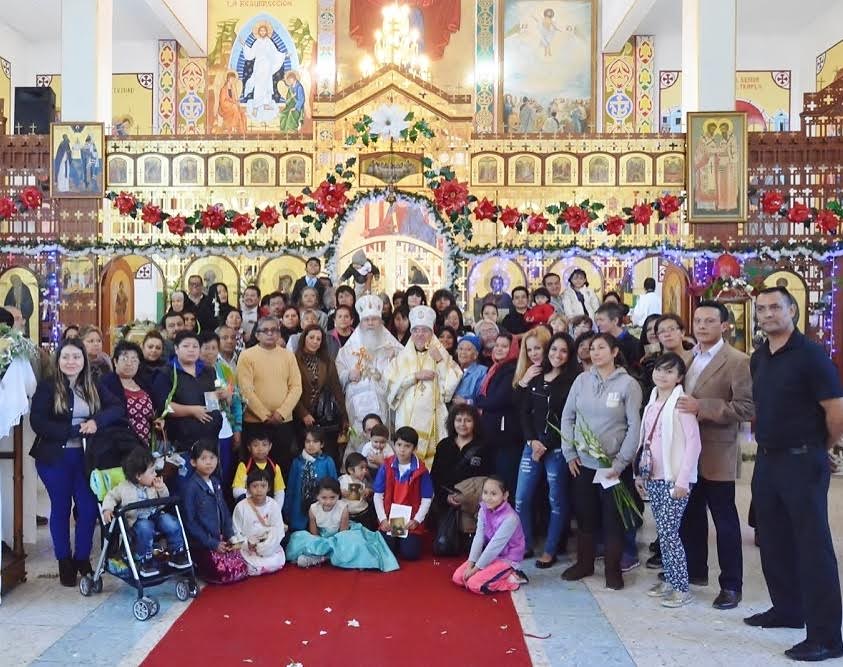 For decades, it has been customary for the Primate of the Orthodox Church in America to visit the Diocese of Mexico during the Theophany season.  This year, His Beatitude, Metropolitan Tikhon made his second archpastoral visit to Mexico City January 13-16, 2017, where he was warmly greeted by His Eminence, Archbishop Alejo and the diocese’s clergy and faithful.

Metropolitan Tikhon was welcomed at Juarez International Airport by His Eminence ‎Archbishop Alejo; Archpriest Antonio Perdomo of McAllen, TX, a member of the OCA Metropolitan Council; and local clergy and monastics.  Accompanying the Metropolitan were Archdeacon Joseph Matusiak and Subdeacon Roman Ostash.

On Saturday, January 14, Metropolitan Tikhon visited Holy Cross parish in Ecatepec, a Mexico City suburb, where he was greed by Priest Antonio Santiago Vera and the parish faithful, which included many children.  After celebrating a Service of Thanksgiving, Metropolitan Tikhon offered words of encouragement to the clergy and faithful to continue in their fruitful missionary work in and outreach to their community and neighborhood.  Since Father Luis’ assignment to the parish four years ago, the parish has grown quickly.  As with all parishes in the diocese, funding is very limited, and most of the work in constructing churches is accomplished by the faithful themselves. 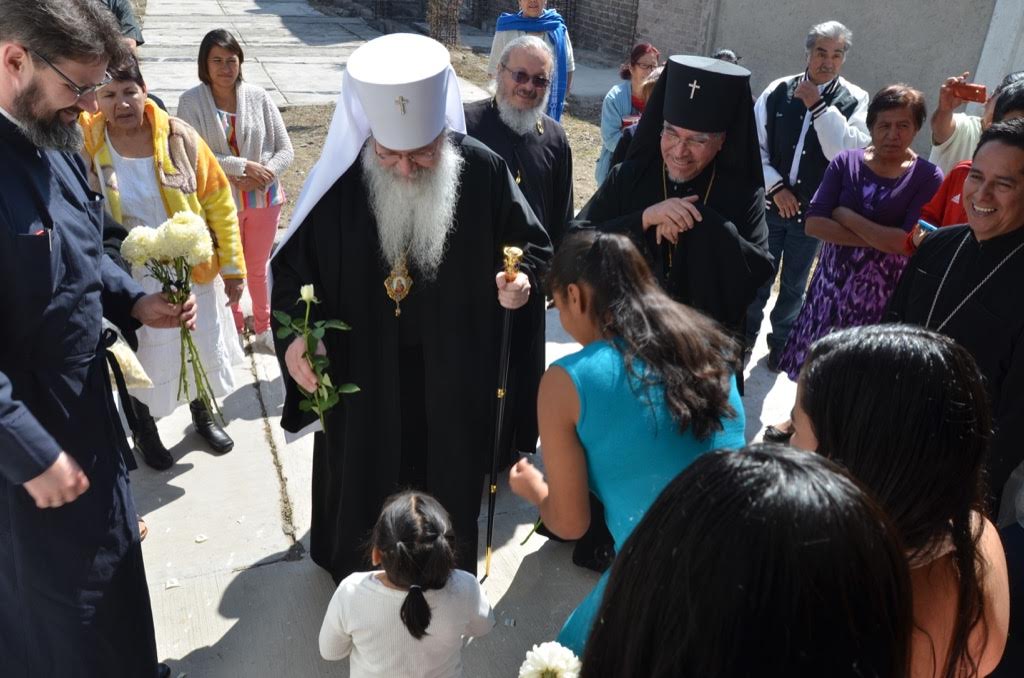 Metropolitan was warmly greeted by faithful of a local parish.

From there, Metropolitan Tikhon visited Mexico City’s Holy Trinity parish, where was welcomed by Priest Jose Luis Serna-Estrada and met with area clergy and monastics.  He spoke of the importance of the monastic witness and vocations, sharing his own experience of monasticism and encouraging the monastics in their vocations and ministries.  After their meeting, Metropolitan Tikhon, Archbishop Alejo and the clergy and monastic celebrated the blessing of the cornerstone of a new monastic house that will be attached to the parish.

On Saturday evening, Metropolitan Tikhon attended Great Vespers at Mexico City’s Cathedral of the Ascension, where he was warmly welcomed.  At the reception that followed, he delighted in fellowship shared with the faithful and clergy alike.

On Sunday, January 15, Metropolitan Tikhon and Archbishop Alejo concelebrated the Divine Liturgy at the Cathedral of the Ascension, during which Antonio Gonzalez, a member of Saint Benedict Mission, Leon, Guanajuato, was ordained to the order of Subdeacon.  Metropolitan Tikhon delivered the homily in Spanish.  An English translation of his homily appears in its entirety below.

The Great Blessing of Water followed the Divine Liturgy, after which the hierarchs, clergy and faithful processed to the playground across the street from the cathedral to bless the 15-foot cross that dominates the site.  A festive dinner in Metropolitan Tikhon’s honor was enjoyed by the clergy and faithful alike after services. 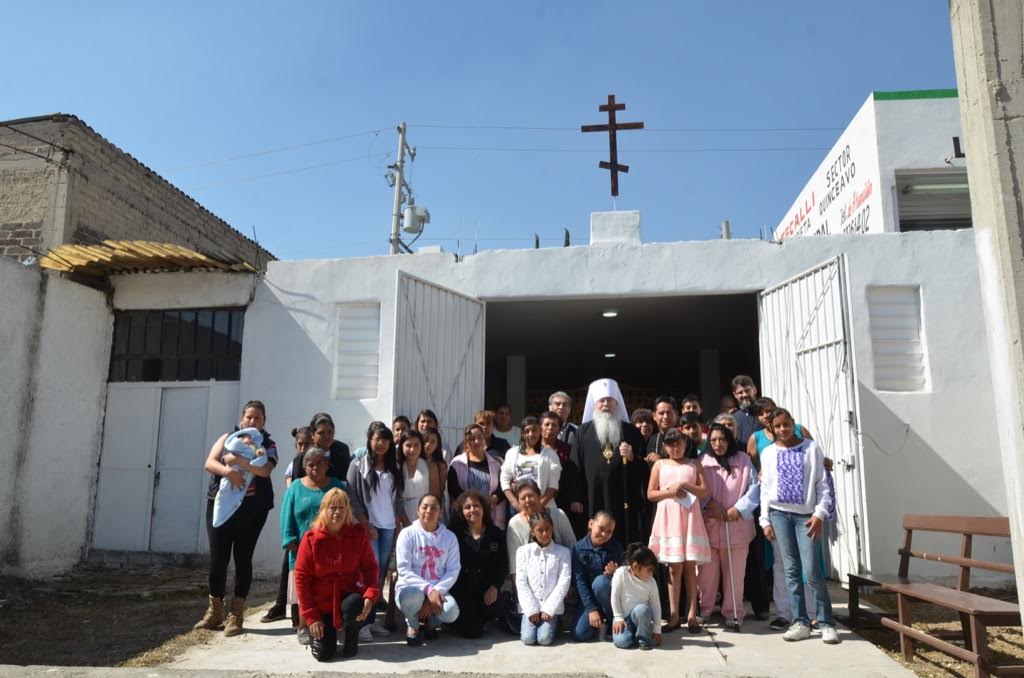 Throughout the weekend, Metropolitan Tikhon and Archbishop Alejo discussed short and long-range plans for expanding the diocese’s efforts.  Archbishop Alejo announced that 2017 is being dedicated to the memory and example of Saint Herman of Alaska as a model of mission and evangelistic outreach.

Homily delivered by His Beatitude, Metropolitan Tikhon
at the Cathedral of the Ascension, Mexico City, Mexico
Sunday, January 15, 2017

Your Eminence, Reverend Fathers, brothers and sisters in Christ,

I am grateful to God to be with you again this year for the Feast of Theophany and to participate in the Great Blessing of Water as we rejoice in the revelation of the Holy Trinity: “The Trinity, our God, today has made Itself indivisibly manifest to us. For the Father in a loud voice bore clear witness to His Son; the Spirit in the form of a dove came down from the sky; while the Son bent His immaculate head before the Forerunner; and by receiving baptism He delivered us from bondage, in His love for mankind.”

Last year’s visit with you in January left a deep impression on me. I was inspired and humbled by what you have accomplished with the grace of God.  There is a humility and energy in your community life that I wish all of our people in the United States and Canada could see.

The missionary team that came from the Orthodox Church in America and the Orthodox Christian Mission Center last March felt the same inspiration. They visited the communities in San Esteban, Hidalgo and Pisaflores in Veracruz, where as a priest Archbishop Alejo did missionary work. They returned to the United States, as I did, having received much more from you than we gave. God is at work among you, and for that I am grateful and inspired.

This is an historic year for Christianity in Mexico. In 1917—one hundred years ago—all Church properties were nationalized, many churches were closed, monasteries were abolished and the communities dispersed, and clergymen were required to obtain licenses to function — measures not unlike those imposed at the same time as a result of the Russian Revolution. Your own Diocese of Mexico traces its roots to this earlier period of the 20th century and the emergence of a national Mexican Church. As you celebrate your 45th anniversary you have inherited a powerful sense of being both Mexican and Orthodox. I saw this very clearly last year. Your ongoing mission efforts and your relationship with the broader Mexican society is vivid testimony to this vision of truly offering yourselves as a church for all in Mexico.

Those who have more than others enter the kingdom by divesting and sharing what they have.  John the Baptist offered exactly the same message. When the crowds came to him for baptism and asked what they should do, he answered them, “He who has two coats, let him share with him who has none; and he who has food, let him do likewise” [Luke 3:10-11].

This touches on how we ought to look at each other and treat each other as Christians. And this is expressed beautifully in Saint Paul’s letter to the Colossians.  It is short, so let me read it again.  “As the elect of God, holy and beloved, put on tender mercies, kindness, humility, meekness, longsuffering; bearing with one another, and forgiving one another, if anyone has a complaint against another; even as Christ forgave you, so you also must do.  But above all these things put on love, which is the bond of perfection. And let the peace of God rule in your hearts, to which also you were called in one body; and be thankful.  Let the word of Christ dwell in you richly in all wisdom, teaching and admonishing one another in psalms and hymns and spiritual songs, singing with grace in your hearts to the Lord.”  That last line echoes especially well here in this cathedral, “singing with grace in your hearts to the Lord,” because your singing is so beautiful and is a glorious sign that you have made your own the words of Saint Paul.

This short message from Saint Paul can serve all of us as a daily reminder of how to live as Christians. Saint Paul understood through difficult experience that communities require constant effort to stay together. It takes constant vigilance to remain focused on Christ and not be distracted by irritations and complaints, to overlook offenses and lift each other up rather than easily point fingers and pull down.  That must be true as much here in Mexico City as it is in Washington DC. We live in a world that is often harsh, cruel and unwelcoming. This is why at this particular point in history we as Christians need to pay special attention to being examples of Christ’s most basic human kindness.  This was at the heart of my Christmas message this year.  As Father Alexander Schmemann wrote, “A kind person is kind because he or she accepts people as they are, covers them with kindness. Kindness is beautiful, the most beautiful thing on this earth. Virtuous people are activists, obsessed with the desire to impose their principles and goodness and easily condemning, destroying, hating…. In this world there is a lot of virtue, and so little kindness.”

Your kindness was one of the impressions you left on my visit last year. You do not shut yourselves away from your neighbors. I noted at the Great Blessing of Water that neighbors of the cathedral were delighted that a cross was planted in the playground across the street from the cathedral.  The cathedral faithful and area residents alike were blessed with holy water. And later, gifts of food were distributed to members of the local community.

So again, I thank you for your witness and encourage and exhort you to continue in your faith and efforts on behalf of Christ and His Church.  You will always have big challenges in front of you, but as we heard from the Lord in today’s Gospel, “The things which are impossible with men are possible with God.”

May our Lord Jesus Christ, to Whom the Father bears witness, and upon Whom the Holy Spirit descended in the form of a dove, continue to bless all of us, both now and ever and unto ages of ages.  Amen.