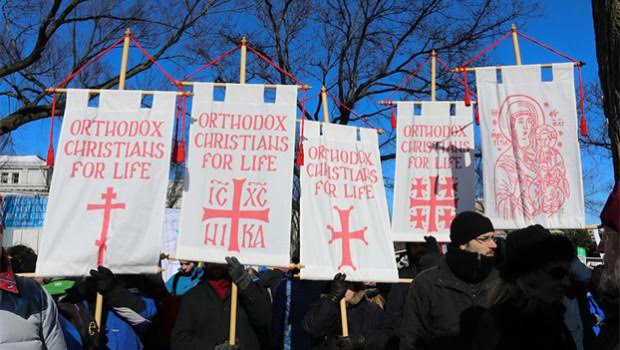 Sunday, January 22, 2017 will be observed as “Sanctity of Life Sunday” in parishes across the United States.  The commemoration, which marks the 44th anniversary of the Roe v. Wade decision that legalized abortion in the US, serves as a prelude to the annual March for Life, to be held in the US Capital on Friday, January 27—one week later than usual due to the inauguration of President-Elect Donald Trump.  See related story.

The complete text of Metropolitan Tikhon’s annual Archpastoral Message for Sanctity of Life Sunday appears below and is available for downloading and local distribution in PDF format.

Updated information and resources related to the January 27 March will be posted on the OCA web site during the coming week.

To the honorable Clergy, venerable Monastics, and pious Faithful of the Orthodox Church in America,

My beloved brothers and children in Christ:

When Christ approached the River Jordan to go down into its waters, John the Baptist trembled. With spiritual vision, he recognized the Lord that day, for they had met years earlier, before either of them had yet emerged from their mothers’ wombs. Elizabeth felt John leaping within her upon hearing the voice of the Holy Virgin. John’s little heart already burned with joy at perceiving the presence of Him Who was to take away the sins of the world. John was to spend his entire life preparing for a future encounter with this same Lamb of God, but what happened that day at the river was unlike anything he could have foreseen.

Christ, who had no sins of His own, took the weight of our sins upon Himself. At the Jordan, He submitted to a ritual purification of sins, in order to cleanse us from the grime of the passions. He descended into the waters as into a grave, so that we might be given new and everlasting life.

These bright themes echo in our ears in early January each year with the Church’s celebration of the Feast of Theophany. The joy of sins forgiven, of hearts made clean, of spiritual eyes washed and illumined by the shining face of Christ: these are joys that “no one can take away from us” (cf. John 16:22).

It is only with such corrected vision, with such purified thoughts and hearts that, later in January each year, we can turn our attention, with sobriety and indeed with sorrow, to the anniversary of the Roe v. Wade Supreme Court decision and all that it entails.

And what, in fact, has legalized abortion led to? We need to ask this question and provide a frank, if only partial, answer, because in the nearly five decades since Roe, a deep cultural and moral cynicism has set in, and I fear that our ears, our minds and our hearts may have grown dull to the full horror of abortion. For many, this is but one among several political “issues”—stale, overemphasized, and divisive—while for others, it can bring long-hidden pain and grief to the surface. In either case, the Church, so it is sometimes suggested, is better off not speaking out.

The Lord, however, has endued His Church with a voice of mercy and truth, a voice of righteousness and peace (cf. Psalm 84:10). And as long as Rachel continues to weep for her children because they are no more, the Church’s voice cannot be silent (cf. Matthew 2:18).

The Church also has a perennial duty to educate her younger members about the sanctity of marriage and sexuality which are inextricably bound to the holy gift of new life. Where the world eagerly teaches our youth to identify with and serve their passions, adult Christians, by their word and example, must form them in a life of ascetic restraint, without which the passions bring about turmoil and destruction.

And, perhaps more controversially but no less true, the Church must provide a prophetic witness and forthright correction to the powerful of this world, to the abortion industry and those who give it financial and legal support. By introducing lethal instruments into the sacred intimacy of a mother’s womb, the abortion industry has succeeded in commodifying human vulnerability and fragility. While deeming itself a provider of “reproductive health,” it leaves in its wake the wreckage of psychological and physical trauma, spiritual ruin, and a death toll of staggering proportions, all the while amassing its own profit and prestige. No Christian can “stand with” such evil. No Church can fail to denounce it.

Our words, of course, must be confirmed by our deeds. In the many grassroots efforts of the Pro-Life Movement, such as neighborhood crisis pregnancy centers, volunteer counseling hotlines, and campus student groups, we see the commandment to “bear one another’s burdens, and so fulfill the law of Christ” put into action (Galatians 6:2). The humility and selflessness exhibited in such good works gives the lie to the caricature of the Pro-Life Movement as fueled by Pharisaical rancor.

Indeed, the Pharisees laid heavy burdens on their neighbors’ shoulders (Matthew 23:4), but our Savior came to take away the heavy yoke of sin. He stood among sinners on the shores of the Jordan, not in order to support or condone sin, but that all the world’s sins should be laid on His shoulders.

As His disciples, we have a mandate to bring all nations to Christ the Giver of Life, by baptizing them and by teaching them to observe all that He has commanded (Matthew 28:20). In our society this will often involve us in voicing unpopular opinions that, however gently and lovingly expressed, may well lead others to marginalize or reject us. The Lord repeatedly warned His disciples of this likelihood. But if we are to take part in Christ’s saving work of lightening His people’s heavy load of sin, then we cannot neglect such faithful witness. In humility, but also with boldness, we must stand with Christ. And—though the evil one tells us otherwise—Christ’s commandments are not burdensome. His yoke is easy. His burden is light (1 John 5:3; Matthew 11:30).

Liturgical petitions and prayers for Sanctity of Life Sunday are also available on the Prayers for Orthodox Christians page and in PDF format.