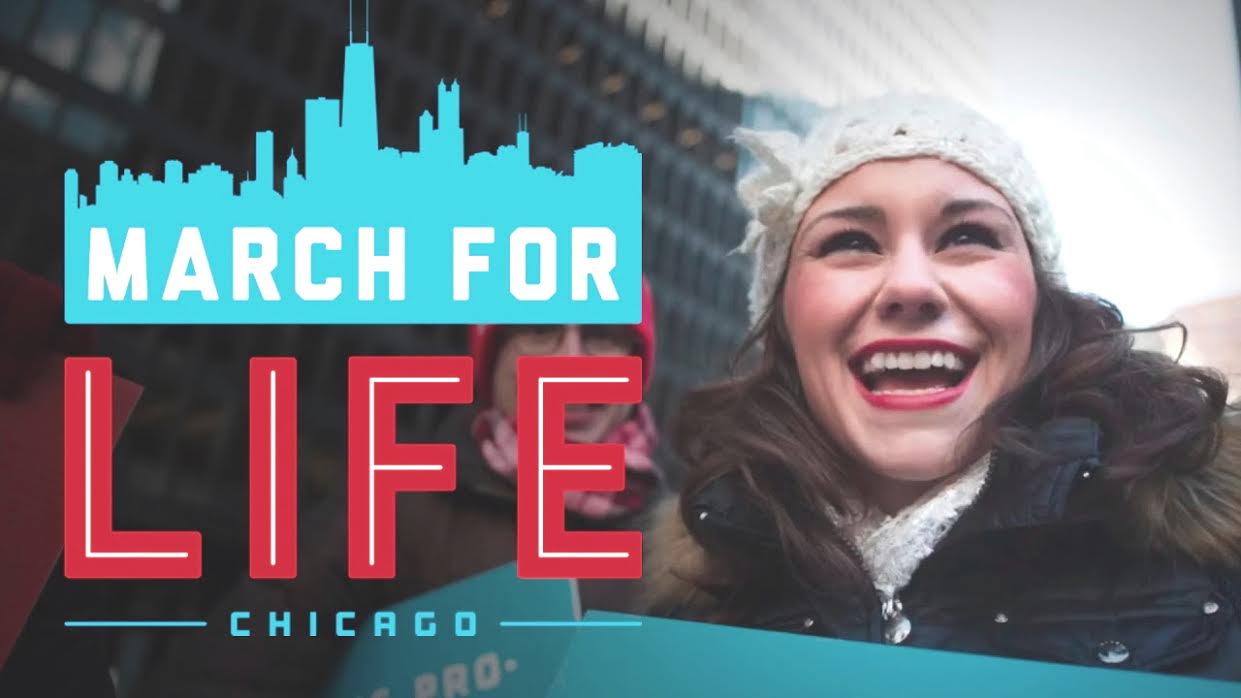 His Grace, Bishop Paul of Chicago and the Midwest will be among the speakers at the annual March for Life Chicago.  The March—this year’s theme is “Life Wins” — will be held at Federal Plaza, 50 West Adams Street, Chicago from 2:00 p.m. until 4:00 p.m. on Sunday, January 15, 2017.

Other speakers include Cardinal Blase Cupich of the Roman Catholic Archdiocese of Chicago; Gianna Jessen, an abortion survivor and well known pro-life advocate and speaker; Rev. Dr. Matthew Harrison, President of the Lutheran Church-Missouri Synod; Congressman Dan Lipinski, US Representative, Third Congressional District of Illinois; Pat McCaskey, Co-Owner, Chicago Bears; Randy Dziak of Students for Life of Illinois; Lake County Sheriff Mark Curran, who will emcee the event; and others.  The March is sponsored by a coalition of pro-life, pro-family groups, including the Orthodox Church in America’s Diocese of the Midwest, the Catholic Archdiocese of Chicago, Aid for Women, the Catholic Conference of Illinois, Students for Life of Illinois, the Thomas More Society, and several other organizations.

Detailed information on the March and related Chicago area events is available on-line.

In related news, Bishop Paul will offer a presentation in conjunction with the ninth annual pan-Orthodox Sanctity of Life Service to be celebrated at Saints Peter and Paul Church, Burr Ridge, IL at 6:00 p.m. on Sunday, January 22.  The service and presentation are being sponsored by the Orthodox Christian Clergy Association of Greater Chicago, which represents the region’s 80 Orthodox Christian parishes.

Faithful across northwest Ohio are invited to gather at Saint Matthew the Evangelist Church, 10383 Albion Road, North Royalton, OH on Sunday, January 22, 2017 to pray for the unborn while affirming that life is a gift from God.

The Akathistos Hymn will be celebrated at 6:00 p.m.  Refreshments will follow.  A presentation by volunteers assisting clients at ZOE House will be offered after the service. 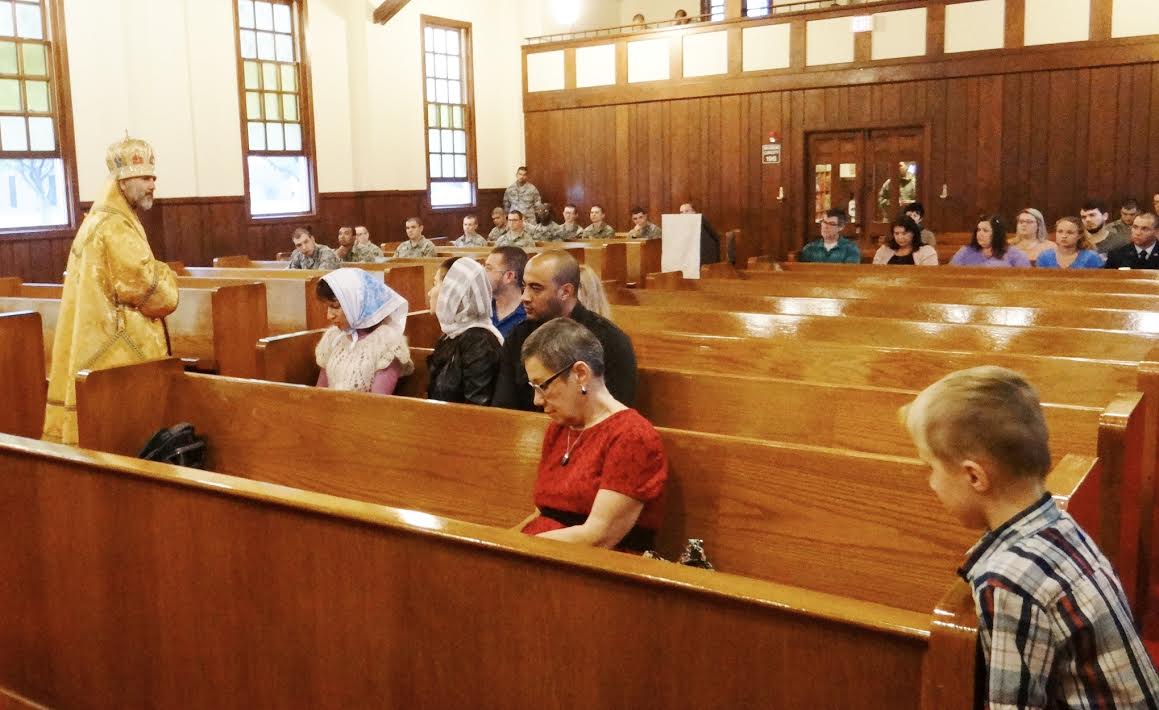 During his recent visit to Saint Michael the Archangel Orthodox Community at Joint Base San Antonio-Lackland, His Grace, Bishop Daniel of Santa Rosa, Liaison for the Metropolitan of the Orthodox Church in America to the Military Deanery, blessed the chapel’s new iconostasis.  Priest Thaddeus Werner, Chaplain (CPT) USAF, welcomed Bishop Daniel on behalf of the community’s faithful.

“When we come together in the Church, we’re in the Kingdom of the Lord,” Bishop Daniel said in his homily.  “The icons remind us of that because the image of Christ our Savior and His Most Pure Mother reveal to us that when two or three are together in the Lord’s name, He assures us that He is present.  So the iconostasis isn’t a wall of separation, but a point of unity, a reminder of unity.” 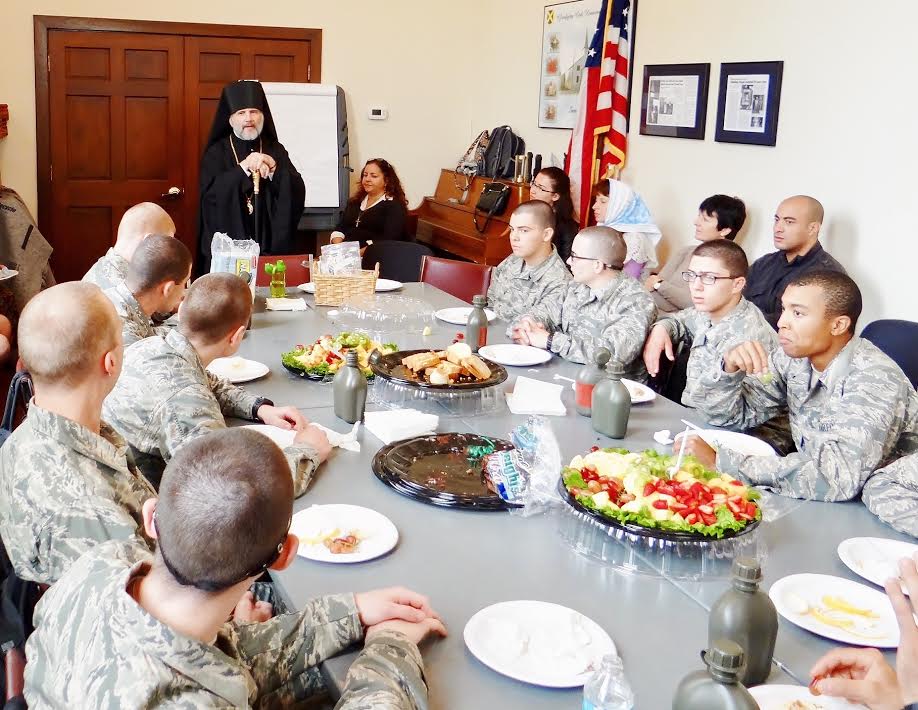 Forty-five basic trainees, technical training students, Defense Language Institute English Learning Center students, and others attended the Divine Liturgy.  In his sermon on Luke 8:41-56, Bishop Daniel reminded those present that when Christ entered an area, He did so with the express purpose of bringing life, love, joy, and healing.  He then charged them that as Christians, they were to bring the life, love, joy, and healing of Christ to those they encountered.  After the service Ch, Lt Col Peter Fischer, Deputy Joint Base Chaplain, presented Bishop Daniel with a coin from himself and on behalf of the Senior Joint Base Chaplain as an expression of gratitude for his visit.  Bishop Daniel then enjoyed fellowship with the faithful and hosted a question and answer session

Registration is still open for the winter/spring 2017 term at the Orthodox School of Theology at Trinity College at the University of Toronto.  Three courses are available.  Dr. Daniel Opperwall and Archpriest Geoffrey Ready will offer “Orthodox Reading of the New Testament,” while Priest Theodore Paraskevopoulos will teach “The Orthodox Pastoral Role and Formation.”  Dr. Opperwall also will teach a course titled “History of the Eastern Churches, 1204 to the 21st Century.”

Courses may be taken on-site or on-line. Additional information and registration procedures are available on-line.  Further information may be obtained by contacting .(JavaScript must be enabled to view this email address) or the Faculty of Divinity Office. 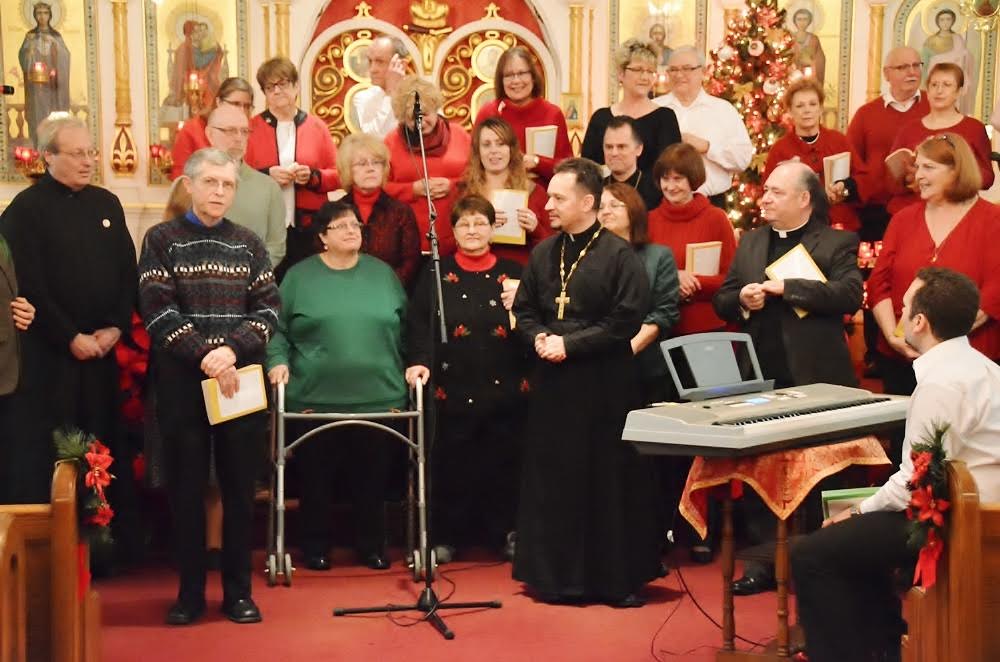 Following the Divine Liturgy and fellowship hour on Sunday, December 18, 2016, Archpriest George Volkovinsky and the faithful of Saint John the Baptist Church, Edwardsville, PA opened their doors to the community for their second annual Community Nativity Concert.  Called “a colossal success,” this year’s concert featured the choirs from several area faith communities.

Saint John’s Choir sang several Nativity hymns and carols in English and Slavonic, while the choir of the Resurrection of Our Lord Polish National Catholic Church presented seasonal pieces in English and Polish.  Participating the concert for the first time was the choir of Dr. Edwards Memorial Congregational Church.  The concert closed with hymns sung by the Immanuel Baptist Church, which led the audience in singing “Let There Be Peace on Earth.”  Following the concert, fellowship and refreshments were shared in Repella Hall.

A video of the concert, which in part served as an excellent opportunity to introduce and share the Orthodox Christian Faith with others while anticipating the birth of Our Lord, is available for viewing. 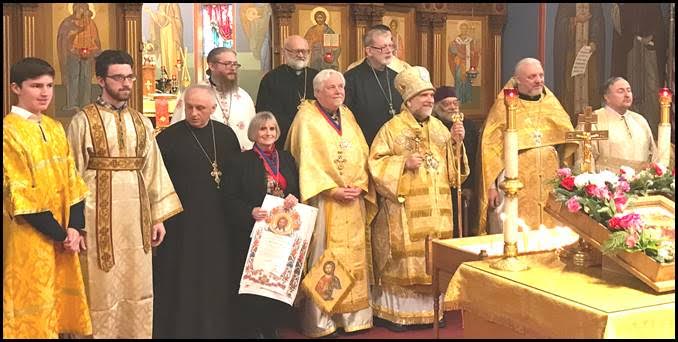 Archpriest Joseph and Matushka Charlotte Woodill were honored on the occasion of Father Joseph’s retirement from active parish ministry at Saint Nicholas Church, Whitestone, NY and the Diocese of New York and New Jersey.  Father Joseph served his last Divine Liturgy as the parish’s Rector on Sunday, January 1, 2017, after which he was honored by his loving community of faithful.

Earlier, on December 26, 2016, His Eminence, Archbishop Michael and New York City Deanery clergy celebrated the Feast of the Synaxis of the Theotokos with Father Joseph at Saint Nicholas Church.  After the Liturgy, Archbishop Michael presented a Synodal Gramota to Father Joseph for his exemplary 37 years of ministry in the priesthood.  He and Matushka Charlotte also received the Order of Saint Innocent on behalf of His Beatitude, Metropolitan Tikhon in recognition of their service to the Orthodox Church in America and to Saint Tikhon’s and Saint Vladimir’s Seminaries.  Many parishioners congratulated the Woodills during the fellowship hour that followed, after which Archbishop Michael and the deanery clergy and their wives treated the couple to a farewell luncheon.

May God grant Father Joseph and Matushka Charlotte many years!