Home/Seminaries/Dean to Give Met. Kallistos Chair Inaugural Lecture
Previous Next 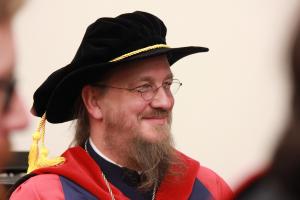 Father John was appointed to the newly created Chair by the Executive Board of VU on September 1, 2016. He retains his position as Dean of St. Vladimir’s, but will visit ACOT a number of times each year to give instruction. This year he is beginning his teaching in Amsterdam on December 9, 2016, with a special public study of the Paschal Sermon by Melito of Sardis. In his new capacity, he also will have the opportunity to supervise doctoral students.

“It is a great honor to be installed as the Metropolitan Kallistos Chair in Orthodox Theology by the Vrije Universiteit, named after my beloved teacher,” said Fr. John, “and also now to have the opportunity to work for the theological formation of students in the Netherlands and to be able to take doctoral students from around the world.

“This honor will also enable a greater cooperation between St. Vladimir’s Seminary and institutions of theological instruction in Europe,” he noted.

The schedule of inaugural festivities at ACOT includes:

Those wishing to attend the events should register here.