Home/Seminaries/An Evening Rooted in Faith and Beauty
Previous Next 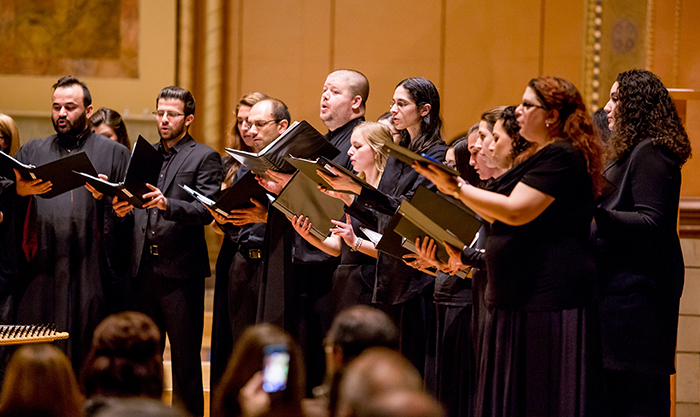 On November 12, the Boston Byzantine Music Festival returned to the First Church in Cambridge, MA, for a stirring evening of music featuring three religious and musical traditions. The theme of the fourth BBMF, which included a symposium on November 11 and several workshops on November 12, was paraliturgical music, meaning music written on sacred themes but performed outside formal worship. The concert, Sacred Voices, Sacred Traditions, illustrated the range of paraliturgical music by showcasing three great musical traditions—Eastern and Western Christianity and Judaism—and highlighted shared features among them, including the importance of the Psalms and the prominence of female composers.

The program began with a performance of Psalms, hymns, and spiritual songs by Holy Cross St. Romanos the Melodist Byzantine Choir, directed by the festival’s artistic director, Grammenos Karanos, and joined by distinguished cantors Nektarios Antoniou, Spyridon Antonopoulos, Apostolos Combitsis, Nick Giannoukakis, Demetrios Kehagias, Vasileios Lioutas, and Georgios Theodoridis. The choir closed the concert with chants, laments, and festive songs. Dr. Karanos commented that he “was especially moved by the response of the great number of HCHC graduates and protopsaltae who traveled from across the US to sing with the choir.” 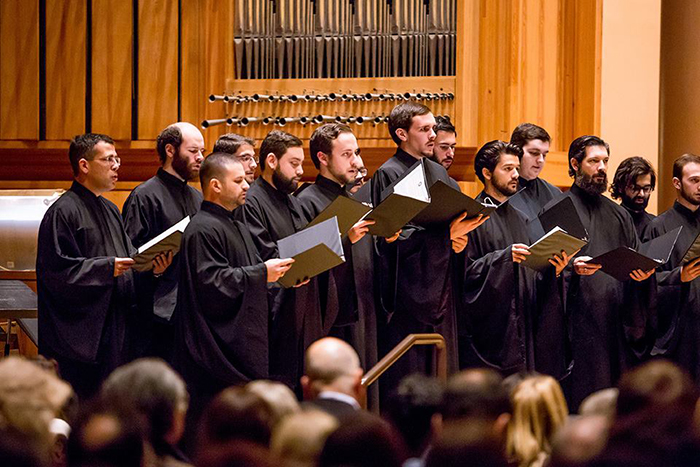 The second performance of the evening was by Cappella Clausura, an ensemble created by director Amelia LeClair to study and perform the music of women composers.The group sang pieces from Byzantium, Renaissance Italy, and contemporary Estonia. Kol Arev, the chamber choir of Hebrew College, directed by Amy Lieberman and cantor Lynn Torgove, followed with a selection of traditional and contemporary compositions  encompassing a range of melodies and styles.

Spanning centuries, nations, and genres, the fourth Boston Byzantine Music Festival brought the rapt audience together at the First Church, unified by music rooted in faith and beauty.

The Boston Byzantine Music Festival is sponsored by the Mary Jaharis Center for Byzantine Art and Culture with the New York Life Center for the Study of Hellenism in Pontus and Asia Minor, both at Hellenic College Holy Cross. Dr. Karanos expressed his gratitude to all who took part in the festival, “which is becoming a much-anticipated annual event,” but singled out “the tireless Brandie Ratliff,” Director of the Mary Jaharis Center, as deserving special thanks.